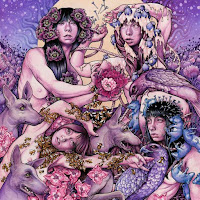 American Metal band Baroness caught my attention at the Grammy's with a nomination for best Metal record. Ive heard them a few times before due to critical acclaim but never got into their breed of sound, however this time I figured I would give the album a fair shot. Its the groups fourth full length and only singer John Baizley survives from the original lineup. Their sound hinges on a Rock core with Metal leanings that at times conjures fiery storming riffs, very similar to Mastodon's distinct style. In its counterpart the record is loaded with great catchy hooks, sing along vocal lines and an undercurrent for melody that surfaces in the climactic moments and interludes like "Fugue". Classic Rock with a hard tone, dynamism in its riffing and the subtle use of keyboards to compliment lead melodies and bury layers of unearthed sound under the riff roar of the energetic guitars.

The records production and mix says a lot about the looseness of their performance style. In the calmer moments everything is tight, fluent and well measured but when the music fires up, the distortion guitars and tone of the music gets a little sludgy, loose and organic. The production puts a lot of emphasis on this with peaking guitars and drums that can be heard with every tom roll as the distortion draws a complimentary energy from the peaking compression. Mostly it compliments the instruments tone but when the drums get lively it can become a bit tiresome to endure.

With matching tone and direction the songs here mix the lines between more tradition Rock ideas and metallic aggression, creatively I must say but the best of them come from moments of melodic cohesion where the guitars and vocals meet in the same direction which is something that doesn't happen all too often. Baizley's shout isn't the most charming but it has character, soul and a burden that is truly sung and felt. When the pieces full in place Baroness make terrific hooks and choruses but not every song could hit that mark. The guitars also deserve merit here for the expansiveness to make repetition interesting in delivery and playing where the dynamics are in a state of motion. It mMakes for a very humanistic listen with a passionate voice singing over a loose and noisy Rock entourage.