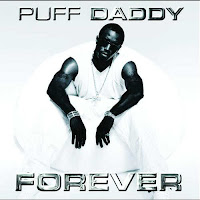 I couldn't help myself, despite its poor reputation and some bad reviews I had to check out Forever. My love of No Way Out had me searching for more of the same on Puff's "solo" release, dropping the "Puff Daddy & The Family" moniker. It is perhaps telling of an album that focuses more on Puff as a rapper than producer yet it suffers from both mediocre production and a lack of spice the Bad Boi family brought on the last record. Despite almost every track having a feature, including the likes of Nas, Redman, Busta Rhymes, Jay-Z, Bizzy Bone and a posthumous Biggie, the album fails to ignite a spark as it lulls through the motions.

Forever opens with a track to set the stakes high, the pressures of Puff's situation encapsulated with news sound bites, sirens, lightning strikes, gun shots and tribal singing slowly elevating with heavenly choral chants, spinning chopper blades and soaring bagpipes. Its an ambitious tone which slips away into the slick and pristine production of tight kicks and dazzling electronics sparkling around the piano melody on What You Want. You can hear the problem when Puff steps on the mic, his flow soft, timid and to calm to be the lead voice. He gets his point across with decent lyrics but the delivery lacks immediacy and energy to elevate the beat, his casual conversational style would prove to fall behind the production on almost every track.

Do You Like It encapsulates a lot of this record, super slick late nineties production comes to life with tight snappy drums resonating off futuristic synths rattling electronic zap noises around the key vocal sample as the baseline strikes sparingly. Its one of the better tracks as Jay-Z brings it to life with a stronger, superior presence as a voice with power. Unfortunately this vision fades as quite a few weak cuts dilute the run time as the albums better instrumentals are drowned out. I must mention Pain, a brilliant sampling of the opening chords to Les McCann's Benjamin, however it was done better a few years back by Mobb Deep.

Puff's self obsessed, status oriented ego dominates the albums tone, every other song is affirming his wealth, success and it seems he is paranoid of anyone who doubts his riches. It gets tiring quickly and manifests into a handful of weak interludes that border being laughable. This obsession with status and perception reaches a bizarre point with the return of the Mad Rapper, Puff appearing in his dreams to rob him. Its a strange moment right before the closing track which no doubt is the records best cut. Puff declares himself as public enemy number one for a song almost redeeming of the record. A banging beat and enthusiasm in his rhymes goes a long way to create a bright end to a dull record.