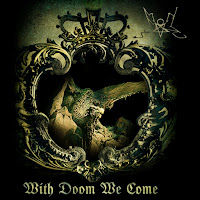 To know the Austrian duo Summoning is to know this record. Forming in the early years of their Norwegian Black Metal scene, they infused the shrill and ghastly Metal of the time with a seemingly polar opposite sound, that of symphonic fantasy inspired the literature by Tolkien's middle earth realm. Symphonic Black Metal existed at the time but Summoning's adventurous use of melody and choice of keyboard aesthetics brought to life vivid visions from their inspired fantasy world. It took the band time to develop and evolve, over several records they grew to unite the contrasting sounds, rather than awkwardly shuffle between the two. Distortion guitars ended up following the mood the keys conjured and the clattering drums eventually gave way to the iconic booming tribal war toms performed on drum machines. "With Doom We Came" is a triumphant venture back into that familiar realm. With the bands output slowing drastically since 2001, it marks five years since their last release, an obvious sign that quality and inspiration comes first as there is no shortage of it here.
The roaring epic that is, comes to life again as we delve into the realm of mighty beasts, brave adventurers and breath taking beauty in the revel of mother nature. With gleaming horns and trumpets the tone of another realm is mustered as dense, ripping guitars elevate the darkness alongside Protector and Silenius's tormenting throaty screams that howl over the bleak guitars. Despite their grim nature they seemingly co-exist with otherwise, bright luscious and inviting instrumentation in the symphonic region that paint visions of the most serine and stunning places. Its spell bounding and enchanting as flutes, pianos and the like usher in timeless melodies of folksy tales from the beyond.

This harmony is what Summoning have grown to forge and it comes with little surprises. The usual rise and fall of grandeur occurs as guitars and screams drop out entirely, sometimes the other way around, allowing for a great sense of scale and scenery to bestow the listener as the elements disappear and return again. Its marked with the usual delights of choral reverberated chants, spoken word quotes from the books (i presume) and the epic roaring of dragons, filling great halls with its quaking echo. These ideas have been executed to perfection before but they are always welcome as they give the music another cinematic and visual dimension.

From the first listen and still today I am a little taken back by some production choices, firstly the distortion guitars come on so strong with a thick, dense and dark tone, its excessive, it has that gritty FL Slayer sound and I'm not keen. Perhaps they are still routed in low-fidelity ideals, much of the music clashes and peaks a little with a lot of noise crammed in between, smothering the lush instruments that rub right up against the shrill screams and gritty guitars. It can become a relief when they drop out. This album is ultimately exactly what you'd expect, with no tricks up the sleeves and a couple of stand out tracks among its many lengthy songs, this next chapter is more of the same, very enjoyable but leaves me with a feeling that it would be nice to hear some evolution in their ideas, especially when it comes to production as the dark Black Metal side of their sound greatly weighs on the fantasy realm the so vividly inherit.