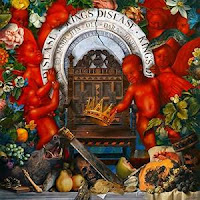 After a disappointing Kanye West collaboration, Nasir, it is great to hear the king of poetry on the mic get back on form with a fully self realized album. Kings Disease has its concept and theme running from front to back, tying the woes of fame and success back into his current adventures and frame of mind with thoughtful maturity. Its a collection of reflections and life lessons, Nas brings his wisdom and knowledge to us through his lyrical prowess, just as hes always done.

Hip Hop however is a game of two halves and initially a source of excitement, the instrumental aesthetic gleam of its opening track dulls swiftly. Heavily Kanye inspired, a voice oriented production of soulful sample stitched together in peaked, distortion embracing styling dominates the opening tone. Initially grabbing, it becomes somewhat of a drone when the colour fades. Being the statement affirming track, it ends up becoming a fumbling start to the record.

Past this moment its sharp percussive beats and blue pianos paint most these songs with a jazzy, soulful uplift reminiscent of the 70s with a shade of street smarts. Its rooted though, no nostalgia trip, firm urban vibes perfect to resonate with the songs various themes. Although they don't deliver diversity instrumentally, the consistency its helped along by the short nature of these songs. They house his verses with purpose, never stretching the material, keeping it all concise.

This is helped along by a fair number of features, including The Firm, bringing Dr. Dre out of the shadows for a brief but underwhelming appearance. AZ returns on the track too, great to hear his Mafioso style is still potent. Without diving into the topicality with any specificity, its mostly mature, level headed thought around the struggles of black life in America in this day and age. Not straying into any contentious or polarizing avenues, Nas paints a path forward, an air of uplift about where things could go. Its a natural current of positive he emanates, or possibly that I perceive.

Nas is still on point, his knack for swift poetic flows interwoven with street talk is firm and proud but without surprises or aces up the sleeve it leaves one wishing for a little more. Kings Disease ticks all the boxes but after a few spins sits a strange place where the excitement has dulled. Perhaps this is one to come back to after some absence has brewed and see how it sounds once again.