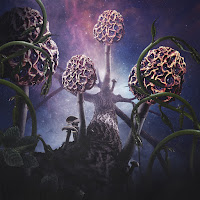 French musicians Blut Aus Nord feel like a cryptic force you can rely upon to deliver esoteric Black Metal that allures and engulfs with its majesty. Thirteen or so albums deep into their artistic output, the group continue to forge intelligent music that is testament to their experience and yet still steeped in inspiration. Their Avant-Garde nature means each project spins a different wheel, their last effort Deus Salutis Meæ a maddening dive into Industrial and Noise. This time around the word traditional still can not be applied but their are echos of modern experimentation reminiscent of Batushka, Mare Cognitum, Chaos Moon and Oranssi Pazuzu.

A bleak smothering of dissonance collides with esoteric gleams of color as the rhythm and lead guitar duel in tandem. Alongside the rumbling rattle of vibrating blast beats they birth abstruse vibrato melodies flickering out from the churning wheel of thick distortion rhythm picking. The guitar work often alternates between conventional chugging metallic riffs and bursts of wavy chord dissonance. Its spellbinding, a roaring sound that moves like an amorphic abyssal movement often falling in to shape and form between stretches of spurious madness. Its lead guitar may even sound conventional or classic in phrases but its mastery of mixing and delivery yields it to this mysterious vision.

The vocals are a treat, on two fronts the same principal is applied. Its meaner shouts and gutteral cries bleed from the depths of a crowded mix, never encroaching the foreground. They arrive like a surge of energy from deep within, just adding layers to the hypnotic sound at work. Its counterpart can often be heard alternating. Also buried behind the guitars, spiritual choirs of monk like male voices call like spirits from beyond, sometimes so subtle they sound like a layer of keys added for atmosphere. Its arcane in nature, melodically savage and a touch psychedelic in places.

The band have forged another fine record, a solid seven tracks serving a sensational slice of something specific that's subtly sinister. Its cohesive and well crafted as the songs plunges you into its designed chaos. The musicians place careful moments of respite with acoustic guitars ridden in oozy reverb effects to guide you through its machinations of fiery madness and arcane wonder. It hits this note from the get go and every listen since has me concluding this is a fantastic record you can come to over and over again for its particular flavor of esoteric darkness. 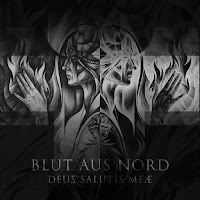 Harrowing, sinister and damn right ugly, the flailing torment of souls arrives in audio torture form as the damned "Blut Aus Nord" arise once again from the depths with another hellish installment in their derivative hybrid of Black Metal and Industrial. Taking on a new savagery, the French outfit assault the senses with nonsensical, bizarre guitar work that sacrifices melody to madness in a highly ambitious project one can tire from in its unsettling perpetual darkness. Its a big shift in sound given the last album was the third chapter in their Memoria Vetusta series, a comparatively "brighter" sound rooted in more traditional style. Here we see the group twist the nails for another stab at satanic absurdity.

The record kicks off with a frontal aesthetic experience, squeezing its texture into dimensions that feel oddly expansive and yet narrow as a diminished guitar distortion chugs a single note groove that feels massive within its distant, meaty bass rumble. It stretches back and forth, surrounded by thin synths, the rattling clatter of devious drums, nefarious gargling screams and ritualistic chats of corrupt worship passing by, poise the atmosphere in a temperate position for which it can choose to go.

If any sense of potential groove, or traditional Metal was lurking the following "Impius" hurtles us into the cacophony of heinous demonic noise as the utter agony of guitar screeching sludge is swarmed and strangled by abhorrent voices, vile screams roaring from the abyss and the wicked screeches of odious witches. They assault with a vivid flavor fit for the worst horror scenes and beyond your imagination. Its a truly frighting sound, the tapestry of nightmares. This wretched dissonance of discord dances on the grave of melody as it takes every opportunity to punish the listener with its unrelenting apatite for blackness. Its inclining of musical coherence, twisted in deviation as the continuous displeasure becomes its focal point.

There are mid-tempo moments, the blast beats do scale back occasionally and on "Abisme" the chants of fallen priests can be heard calling from the depths of hell but in these calmer moments no sense of respite emerges. The atmosphere is anxiety riddled, poised on a bed of blades unable to sleep and that is a "disaster art" unto itself but one that I can only be appreciative of, rather than enthralled by. With musical sensibilities cast to abandon the experience only goes so far before it can feel novelty. After many listens I feel as if its made a mark as a horrid, grotesque experience I'll probably never revisit with any semblance of frequency. As art its utterly fantastic, as part of my musical map I'm not sure it can claim a place. 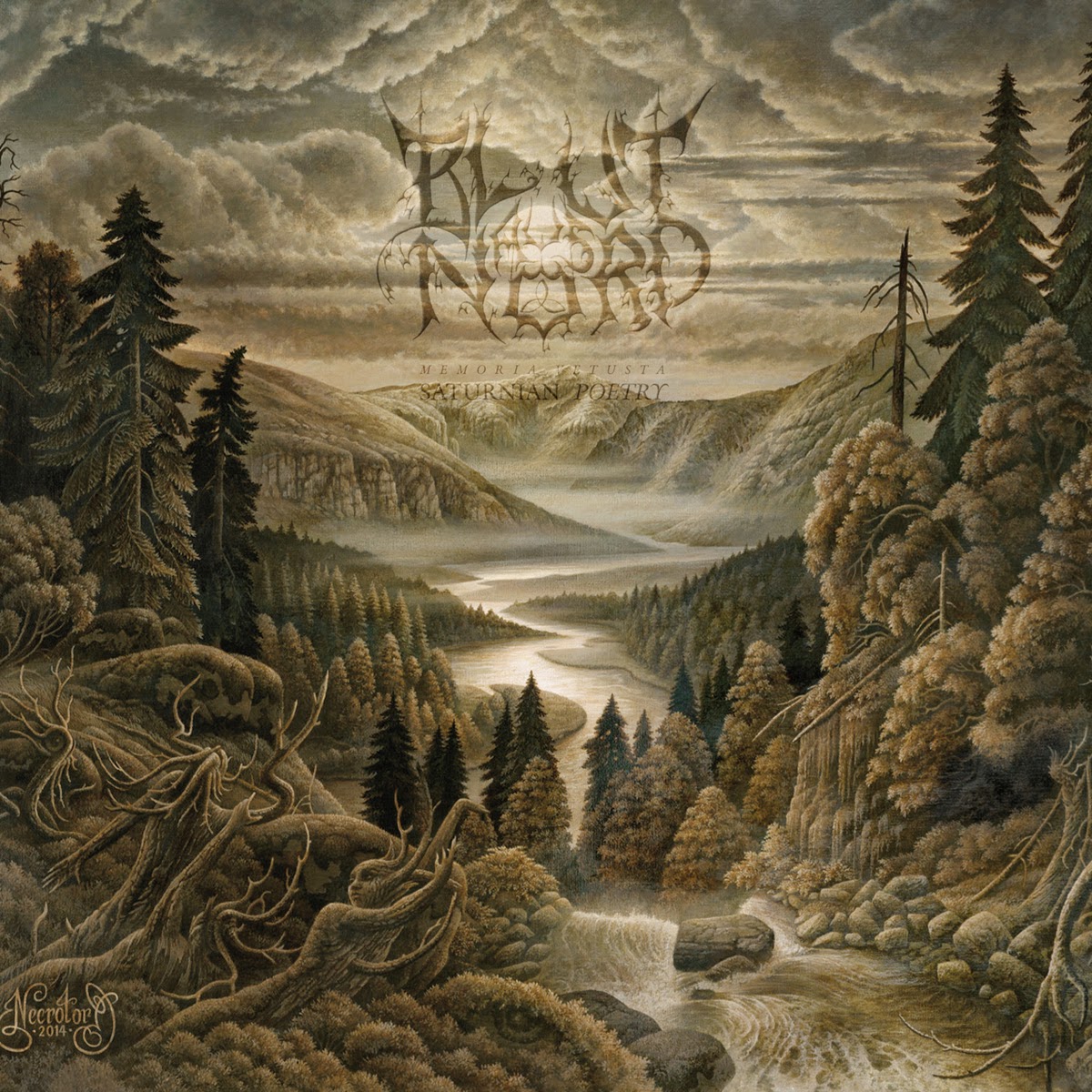 French Black Metal outfit "Blut Aus Nord" are a group I have loosely followed over the years. They have been active since 1995 where they dropped a praised debut "Ultima Thulee". Since then the group have maintained a steady output of records that have continually intrigued me with their musical approach, often straying outside my expectations. In 2011 the group dropped a trilogy of albums, titled "777" that really caught my attention. Noisy, Industrial and damn right ugly at times, these albums delivered unconventional and unnerving musical moments, that at the time hit a note with me, something their previous oddities failed to do on the same level. Excited for more I was eager to listen to this record when it arrived.

"Saturnine Poetry" is the third part of the "Memoria Vetusta" series, and marks a significant difference in songwriting and aesthetics from "777". I was immediately stunned by the rip roaring epic sound this album bursts into with "Paien". Blazing textural guitars shred out immersible progressive riffs alongside thunderous theatrical drums, alternating blasts and fills, littering these songs with depth as they guide a narrative alongside the guitars which continually meld and move through passages of massive proportions. Theres a gorgeous symphonic element lingering in the background, graciously embedding serene melodic depth to these lush guitars, their symbioses fueling the fire. The track quickly finds its way to a soaring peak thats guided by some gruff, snarly vocals which are nicely lowered and buried, a fine touch, theres a lot going on and the harsh nature of them isn't overpowering. As well as the more traditional vocals, theres are some clean folk, viking like choral chants that come in at various places, further complimenting this dramatic and theatrical musicianship. Theres also the occasional melodic guitar leads that seem to drop in and out and just the right moments, climaxing and further narrating these monolithic rip roaring tracks. The chemistry is just stunning, an exhilarating and intense force meeting its match with gracious and measured melodics to create one of the finest Black Metal records I can remember in recent years.

Saturnine Poetry plays through its vibrant chemistry by delivering seven inspired tracks that flow like water in the river. These tracks begin, and end, but feel like one entity as the songs share a pallet, and focused direction in terms of songwriting. Each track twists and turns through its relenting aggression and melodic climaxes that from start to end just don't tire. It captured the essence of what I love most about Black Metal, its a place. A cold, natureus freedom that exists deep in the mind, inspired by a lost reality. From start to end you can tune in and fade away. A stunning listening experience.