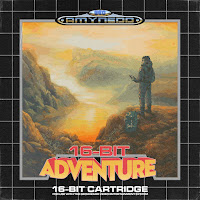 One to be wooed by the sway of nostalgia, Birmingham based Amynedd's sole release had pull for an era I didn't personally experience. Familiar with the Sega Mega Drive aesthetic, its lovingly crafted array of saws, sines and triangle wave synths fit the bill fronted by its contrasting album cover. Half retro game, half scenic view not entirely fitting of VGM. The musical lure were the compositions. Its limited array of tones are somewhat tiring but in paying tribute to an era gone by, some creative liberties in its glossy production, embellished percussion and soft reverbs hold it over.

Unless indoctrinated by hours of adventure, glued to the TV set as a child, a lot of this console gaming era's music can be gaudy and harsh in my experience, especially on the original hardware. 16-Bit Adventure initially avoids that folly with its firm bass pummeling opening track and subsequent mellow melodies conjuring spirit through an adjacent formula, free to greater expression on the following numbers. Its mood is scenic, intriguing and emotional yet as the record grows it seems to hail back to Synth-Pop inspired punchiness on tracks like Tractor Zone, Boulder Zone.

Popping drum beats, snappy percussive sounds and rigid executions lack subtlety, variance and measure as its instruments work on full velocity, forcing its way through the notation. Between them, Merrily Boats and Lilac Orchard swoon with mystic melodies of carefree warmth and adventure. Its this tugging back and forth the spell is often broken. When working with warm synths applied with timely decays, the music transcends as its layers of melody and rhythm pry into fuzzing warm spaces.

Between these more interesting numbers lay the songs akin to the Sonic soundtrack. They in their own right are fun compositions with great chemistry between the various layers of sound chiming together in good spirit but that shift in energy is jarring to the overall atmosphere. It leaves me with the feeling of finding enjoyment in a niche that's not mine, pretty self explanatory given my opening remarks. This is an era I missed out on but if you did enjoy it, you'd certainly get along with this. If not, you'll probably hear the inkling of something more meaningful and inspiring than just carefree fun. Its weaved its way into the more loving compositions, of which I enjoyed most.