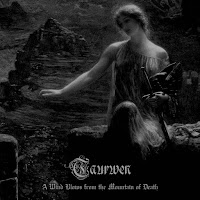 Never before have I felt the chills of resemblance to my own musical output, Forgotten Conquest. In composition and temperament there may be some similarities but the distinction is virtual instruments. The luscious deep bellowing horns, serine yet sorrowful strings and especially the crisp, immaculate bright pianos. There tone and delivery so close to its intended form, catches my ear as the same set of tools I once used. This, Taurwen's debut album, suffers the same follys I too encountered in my amateurish pursuit of manifesting the music in my mind to something tangible.

Flirting with the lost, pale and bleak, its minimalism of lone instruments lay stark and bare, converging on occasions. Its rooted in repetitions stripped of charm by the virtual instruments cold, mechanic precision each string, elongated chord and piano note brings. Pitch perfect and identical in sequence, its atmosphere is cut by the sterility, barely blemished by soft reverberations and echos. The music rotates with such perfection that its meaning, inspiration and emotion feels lost without a human touch.

It is however clear whats aimed for here, a pry into a world of beauty and sorrow held in mother natures cold cruelty and majestic wonder. Its melodies stray and meander, forever wandering alone on the back of this illustrious sound of beautiful instruments with a glossy finish. Its songs open like windows into a moment of inconsequential scenic melodies, with a human presence, one of carved stone and overgrown vines. Some of the music is lone and linear, others richer with multiple layers of composition that too, together, feel naked and bare like a lost poem or faded picture.

Deep pounded drums are struck to muster the oomph for upheaval and building masked crescendos that never quite culminate. Its bells too are an interesting choice, cutting like a knife and often suddenly signifying the end as if a spell had been broken. Its hard to put a finger on this particular place. Caught somewhere between Dungeon Synth and the medieval Fantasy of Fief it certainly has a potential but I can't get past the image of notation on the piano roll, perfectly executed. Its best moment might just be Hum Of The Forest where things get muddied up in its layers of foggy ambience. That human wear and tear is what much of this record needs.