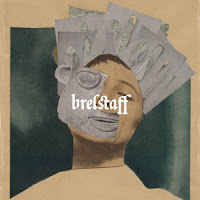 Formerly know as Daryl Donald, this name change to Brelstaff signifies little in the way of musical progression. Its another collection of mini Jazz Hop instrumentals exploring the craft with a familiar Entroducing... akin charm. These short, mostly two minute tracks swiftly conjure an atmosphere and reside there for a brief stay, fleshed out with some variations. The selections of drum patterns and samples mix sweetly into easy indulgences. With enough ambiguity and noises between the obvious pairings, the tracks keep delivering a fresh depth on each listen. Together, the tracks are all laid back, summery and warm. The Jazz flavor keeps it musical and grounded, not running away with the uplift but holding back an air of spirituality. The mood is an introspective one, perfect for both background music and giving it your attention.

The short compositions do feel somewhat demo like. Fade ins and outs give ques to where ideas start and end. Stitched on mini beat creations and the like make it into the twenty minute run time but in all fairness there is no filler. No track out runs its purpose, once seeing through its variety it ends. A voice in the form of rhyme or reason, rapping or singing may serve it well as the voices calling John Coltrane's on the track of the same name seem to ramp up the mystique over a mysterious pondering bass line. Its a dusty track with a lot of charm. That note may just signify what's missing, the foundations are in place but as a collection of beats they feel in need of something to elevate it upwards to the next level. 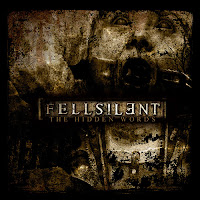 With The Double A being my go too record for youthful nostalgia, memories of this, the bands debut album, are somewhat foggy. I seem to remember its release closely linked to their announced split but these events were over a year apart. Whatever I thought beforehand, returning to The Hidden Words as been another delight from a group I'm keenly fond of. Its amazing how much time has lapsed and love not lost!

The album essentially feels like an extension of the EP, four original tracks, four new and three "linking" interludes has the band simply expand on the persona established. One big change is the arrival of a second vocalist who slips in almost unnoticed. With a similar tone and candour to his partner Neema Askari, Joe Garrett feels neither essential or overlooked, his inclusion works without any bright sparks of ingenuity.

As with the EP, Fellsilent slap together an arsenal of pelting Djent riffs, loaded with groove and rhythm that plays between atmospheric and melodic trade offs. They move from pummelling metallic assaults to steadying backdrop shuffling fretwork as their dynamism flourishes in these mostly straight forward song structures. Often do they keenly lead to a belting breakdown to slam your head along with! The linking instrumentals also serve up riffing delights with infusions of acoustic string plucking.

Returning to this record gave me a greater appreciation for the balance of complexity when chopping up polymetered grooves into 4/4 patterns. So sweetly do they push both angles. The power and persuasion of rhythm is without any burden yet many riffs have puzzling arrangements. Like with Meshuggah I am sure the mystery would unravel a little learning to play their songs on guitar, something I hope to find time for!

Its such a shame this was the end of the road. The band certainly materialised a fine execution of sound and style but where to go from here? Who knows... In all likelihood it may have never surpassed this moment given how fantastic they where at this point, perhaps they exhausted all they had? I remember the statement at the time indicating that everyone involved felt like they had seen it through and wanted to move on. Some music elitists make comments like "they should of quit after XYZ". Maybe that's exactly what these guys did? Go out on top. 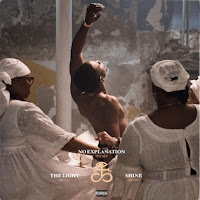 Stagnation is the word that comes to mind enjoying this chilled jazzy trio of Hip Hop tracks flying the flag for the 90s sound. From B4.Da.$$ to All-American Bada$$, young Joey made quite the impression, solidifying him as one to keep an eye on. The Light Pack marks three short songs in three years, all of which could slip into his previous records. It was underwhelming on first impression, his opening verse affirming style and stature, taking shots at Mumble Rap and pronouncing his successes. It sounds tired to these ears, with his established flow unchanged.

The second track brings on Pusha T, who's style is still rather fresh and interesting to me, a reminder to check his work out further. Its a brief bit of spice over a moody, slightly gloomy beat. The final track Shine brings some uplift in tone but again I just don't find Joey's raps that exciting beyond their obvious competence. The concept of mind, body and soul this project is supposed to embody doesn't leap out at this listener. It's ultimately a small release that hasn't advanced any musical prospects for Joey and ended up feeling a little dull in the shadow of his albums. 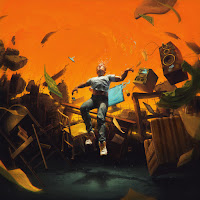 Announced as his retirement record, No Pressure doesn't feel like a send off but its title reflects the mood, a resignation to expectations. With such a prolific output, work ethic and passion for the craft I fully expect to hear more from Logic at some point in the future. For now however he is making an honourable move, devoting his time to fatherhood, putting his energy towards the raising of his newly born son.

It's a firm return to form, echoing the greatness of The True Incredible Story with many of its hallmarks. The digital effeminate voice returns telling intimate details about the projects creation and his influences in rhyme, rap and culture. The days of rapping over classic 90s beats are resurrected on GP4 with an interpolation of Outkast's Elevators. Its checks all the boxes, its spirit inline with what defines him best.

When it comes to rhymes Logic offers up a slice of time perspective as he so often does. With the relief of retirement and the pivoting to parenthood the depth and maturity is gripping. The songs roll one after another with no shortage of engaging topicality. Of course its all packaged within the sharp skill set he possess. I'd say on just one track he sets himself for "failure" as a run through the alphabet in rhymes starts strong but steadily looses its path in the self imposed lyrical challenge.

On the production side he lists his influences boldly. 90s vibes and a helping of Kanye inspired voicing makes for a colorful, soulful, grooving record of mostly uplifting beats and Jazz Hop vibes. A couple fun tracks like A2Z and Perfect shake things up to take the foot of the gas. On the way out things get more thematic, bringing in bright pianos, the sung raps and more of a pop appeal as the record build to a grand bow out.

Obediently yours pulls out one heck of a speech from Orson Welles's radio show archives. A very powerful message of privilege and debt to those without it. A great way to leave something striking in the mind as we potentially say goodbye to a true talent, using this moment to forward deep meaning. At seventy six minutes its a meaty record, full of substance that doesn't fire at the faster of paces. Its a strong body of work set to be steadily enjoyed and enjoyed this I have!