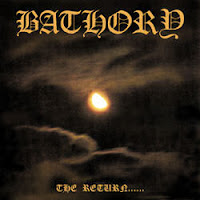 The Return...... Of Darkness And Evil, as its full title goes, is a fitting title for Bathory's sophomore record. I always remembered this as the "smelly" one. Listening to it again over fifteen years later a much more nuanced and interesting opinion is formed. Quorthorn makes a keen stride to embellish a more sinister tone, many abrasive ideas that would eventually become hallmarks in Black Metal. The strike of demonic gongs, deep command roars steeped in reverberations, shrill howls furthering ugly throaty textures and plenty of shadow echos to wrap them up in.

Despite issuing some key ideas for the scene to come, its all fractionally mismatched with the guitar tone that still has a warmer Heavy Metal charm about it, even with the low fidelity. These ideas that aim to dive deeper into the "evil" theme are currently pungent in inception. The whole thing is somewhat akin to early Graveland records. Its fair to say bar one or two songs the music is lacking a magnetism that came before it.

Perhaps in attempt to embrace the dark and foul, performances from the band become fair at best and seem intentionally sloppy in moments of lost synchronicity or attempted "edge". Tempos stutter, and drums loose there groove. It rarely aids the music or its intended theme, that needs to come from good songwriting and Quorthorn's riffs are baked stale for half of the record.

In the latter half of the album a darker guitar tone grinds power chords effectively and in two songs lays a much foundation for the evolution of the genre. Its guitar solos still seem lost in the Heavy Metal cliche tho, breaking the mood. These moments and the intro of dark scenic ambience give the record some needed merit because despite being early, raw and influential, its embryonic experimentation is ugly, not in the aesthetic and rewarding sense but that of a mostly haphazard record.