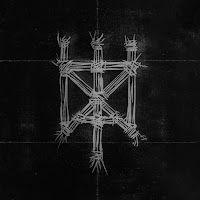 I have an absolute adoration for Hip Hop music, however diversity is something lacking in its first decades. The 90s, for example, many would consider the pinnacle of both artistic creativity and success. But in comparison to the world of Metal and its stylistic divergences, its obvious the genre is narrower and closely knit. When records like this come along its a firm sign of progression, barriers collapsing and diversity in this age of musical cross pollination Internet culture.

God Has Nothing To Do With This Leave Him Out Of It is a short concise plunge into the uneasy. A cathartic release of repented energy. A self administered therapy with an undercurrent of religiosity feeding into its themes of sin, abuse and guilt. Kicking off a sample of Ozzy Osbourne crying for help with an air of despair to his voice, a tone is set for the slow drums to drill in the dark subjects this album will tackle. The transition into Black Sabbath's Self Titled track a nice touch to see it off.

The instrumentals set out a harrowing tone of internal struggles and paranoia. The sampling and beat arrangements are dark, gloomy and ghostly with enough groove in their to keep it from feeling burdensome on the listener. Reading over the lyrics, a lot of pain and personal anguish is exorcised across these tight and direct verses. With a motioned rhythm in flow and Canadian cadence flavoring annunciation, backxwash has a firm command over the narrative where the two elements come together.

The vocabulary and linking of rhymes is frequent and often entrancing. The hooks and between parts embellishes each tracks depth. As the album plays on, its somewhat ambiguous tie to religion grows, suggesting an arc as the finial songs shift in tone. Redemption lifts the mood but its wording shows a person doing right by them self in the face of intolerance. The final vocal sample from some form of spiritual speech indicates forgiveness for all those who do you wrong. A solid conclusion.

Everything about this record speaks to vision and execution. Every line and wording feeling relevant, a grouping of short tracks offering no fluff. Interlude tracks flesh out the musical theme and its dark atmosphere carries between each track wonderfully, letting the album play like one big track in the bigger track. Its not taken many listens to appreciate its greatness. I've got a feeling this one to frequent back to in the future of the never ending musical journey!