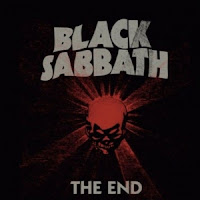 Black Sabbath, a legendary band that needs no introduction but if you happen to not know who these guys are you need to educate yourself, Sabbath are thee band that pioneered Heavy Metal with its most distinctive and lasting qualities in comparison to other bands, ie Led Zeppelin, that were pushing the Hard Rock boundaries at the time. Sabbath put out their self titled debut in 1970 and nothing has been the same since. The distortion guitar tone, the melodic yet doom and hellish atmosphere and Ozzy's remarkable voice shaped the future of Metal to come, having a listing influence on modern bands as well as inspiring the Doom Metal sub genre with "Master Of Reality". Much of Metal's history can be traced back to them and a string of fantastic records with singer Ozzy before his departure in 1979. "The End" is the group's final record, a short four track EP of leftovers from their last full length "13" released three years ago, one that I am guilty of not listening to yet. It's been 48 years since the group first formed, they leave behind a legacy that refuses to be forgotten and this is where the curtains close with the band doing their final round of shows this year.

For a collection of left overs "The End" is surprisingly solid record. The record opens with a thick, strong guitar tone laying down a tight groove at that slower, doomish, Sabbath pace. Ozzy's voice drops in as if It never ages, still youthful, on key and with his distinct tone in full force. The song goes through its seven minutes steadily with a set of riffs that play through a few repetitions in a simple song structure, Gezzer Butler also throwing in some snaky baselines to spice it up with some variety.

The other three tracks follow this rather straightforward song writing and "Take Me Home" adds in an inspired Spanish guitar lead to give a climactic moment it what is a very steady and consistently paced record. Its strengths are almost to a fault, the rigidity of the riffs playing over and over gets a touch stale with many listens but its undeniably a good collection of riffs and grooves that show these guys still have it. Of course nothing to beat the classics, but something you can get behind and rock out too!