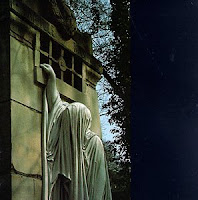 This may be the one, "my" Dead Can Dance record. So swiftly and immediately did it command my interest with mystical enchanted bells playing over a foggy and eerie choral synth that chimes in a moment later. It set the tone for an ancient, dark an deeply nostalgic experience of fantasy music with a similarity to the likes of Erang. In its first half this record borders on Dungeon Synth many years before its primitive inception in the 90s from the likes of Burzum and Mortiis. Unlike its predecessors the bands recreational element is yet to be developed and the visions and atmospheres here tell tales of the land of the dead and forgotten mysticism with a remarkable touch of color and vibrancy.

The records second is my favorite, a short and stunningly crafted piece to send your imagination soaring. Rhythmic synths echo the chimes of war as secretive strings expand and contract through a fog. More instruments chime in to add to the cryptic, mystical atmosphere and I feel as if I'm lost on the foggy moors of forgotten lands, safely observing a supernatural event. The rest of the record has a stronger human element through the sturdy, soft voice of Perry on the first half of the record and Gerrard's on the second, sounding as always like she is from another era of time.

Where the duo take two half's of the record there is a split that can be felt as the gears shift from fantasy to a strikingly dark and serious tones of remorse and suffering. On "Cantara" the mood is lifted with tribal rhythms and more stunning vocals from Gerrard. The other three create sorrowful, grave moods of funeral and loss with little respite for any melodic charm in the wake of heavy, burdening compositions that hold a great immediacy within the musics momentum. From the technical perspective this is a well produced collection of instruments for 1987. Its rigidity of timing may be noticeable but does little to dispel the magic that emanates through the speakers.
Favorite Song: Windfall
Rating: 8/10
Email ThisBlogThis!Share to TwitterShare to FacebookShare to Pinterest
Labels: 1987, 8/10, Atmospheric, Australia, Dead Can Dance, Dungeon Synth, Fantasy, Medieval, Neoclassical
Newer Post Older Post Home