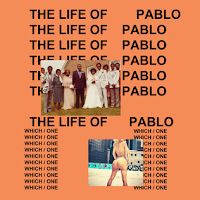 After waves of internet hype and social media buzz, one of the worlds most popular artists drops his newest ambition exclusively through the unpopular, high fidelity Tidal streaming service. Its his eighth full length record and a distant memory of his illuminated arrival into the Hip Hop scene through record like "The College Dropout" and "Late Graduation". I was vaguely excited for this one, the promotional tracks were mediocre, my expectations were in the balance... but not what did we just get?

King Midas of Greek mythology comes to mind, everything he touches turns to gold and that's his curse. Unfortunately in Kanye's case everything he touches is not turning to gold, and he is oblivious to it. Yeezus gave us a taste of Kanye's growing ego, but on this record its stretches far beyond the over bloated, obnoxious lyrics, hollow and shameless for most of this recorded verses. The record itself shows no signs of a purpose or ambition. The records changing name, the last minute shuffling of tracks, adding an additional eight at just before release and using the outro track as an intro? Where is the idea, the inspiration, direction? It's all an apparent mess. "Name one genius that isn't crazy" says Kanye, I'm convinced he is talking about himself and this sporadic behavior is no work of art.

Track listening and last minute changes aside, its the music that counts and I'm sorry to say this was a sorely disappointing slue of unpolished and sporadic ideas that lacked flow, theme or identity. Instrumentally the beats felt average, they could hold a flow, decorate their environment and on occasions showed a spark of light but there was nothing here to challenge or surprise the listener. Lyrically... well Kanye open's with a few lines about a model bleaching herself? And well... Use your imagination, this record is a unfiltered onslaught of Kanye's over inflated ego going through some loathsome self indulgence. The track "I Love Kanye" seems like a love letter to himself, hes in love with himself, he loves hearing his own voice say his name... I'm poking fun, jokes aside I don't know the man but I want to hear some substance of thought and reflection, I don't care how many sneakers hes sold.

Alongside Kanye's raps there is a fair gripe of irritating autotune that I didn't get along with and I could go on moaning... so I will! Whats with the two Pablos? Which one? Picasso, Escobar? Perhaps this mad, directionless, unfiltered record is some brilliant expression of the obscure parallels between art and crime? There is no lyrical content to suggest it is tied in anyway to the title. I'm done, rant over.