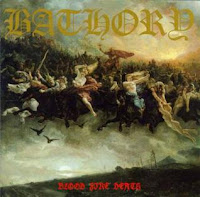 And now for the album where it all started for me... One of my first Black Metal records, Emperor's almighty and majestic In The Nightside Eclipse. It concluded with a bonus track, a cover of A Fine Day To Die, a mind blowing Bathory song, a true anthem of epic wonderment, embroiled in blood and darkness, thrust forth from a clash in the heavens above. Blood Fire Death is where it takes place, however not much of the record is inline with the soaring songwriting of its mesmerizing start.

Opening with Odens Ride Over Nordland, the cries of majestic horses are lost to the echos of mist descend upon the listener. A spooky, chilling and mythic tone is set as the sound of creeping fog and archaic choirs forge a masterful soundscape of aftermath. Unlike previous attempts with ambience, Quorthorn envisions a stunning atmosphere to compliment the albums cover. Its as if souls are falling from the heavens above where the battle rages on beyond the mortal realm.

It gives way to the sombre acoustic intro, lined with whispering vocals and plucked strings echoing through the temple. The suspense for whats to come is palpable, an eruption of might and power. The power chords roar, the screams bellow and a sequence of unforgettable riffs lead us into battle. A couple splashes of blazing lead guitar fretwork set of sparks from the coming onslaught of guitar solos, Quorthorn seemingly mastering every aspect of his craft on this number. A break back to acoustic guitars and choral synths may lead you in the wrong direction as the musical beautifully groans its way right back into the heart of the fire with an unleashing of sonic guitar that shreds to the heavens and back with an astonishing sense of tune.

Its simply unforgettable. An eleven out of ten track that in my opinion elevates the spectacle of this album as the music pivots back into Under The Sign territory from The Golden Walls Of Heaven to Dies Irae. With excellent execution, stunning sprawls of shrill lead guitar noise and sharp potent riffing, Quorthorn nails down the fast paced, full pelt assault of ferocious proto Black Metal that Massacre achieved before it. Its clear his songwriting is in a stride as the songs provide memorable hooks and riffs alike as the listener is barraged with an unrelenting ferocity.

That pace is rested a fraction with the half paced stomp of All Those Who Died but it too has intensity in droves, another fantastic unleashing of evil aggression. Its this block of songs though that highlight a flaw in the record, Its production. The guitars are admittedly a little sloppy, its rugged punchy snare sounds like a drum machine for much of the record. All too often does the feeling in the musics writing outpace the quality as the songs here don't rely on low fidelity gimmicks to sell themselves.

It is only with the opening and closing title track that Quorthorn fully embraces a new spirit in his music, the history and heritage of his Swedish ancestry, Vikings! Where the last record started to experiment with this angle, this time the songs are fully realized and embellished in his roots. The beginning of Viking Metal to come! Despite the knowledge of whats to follow next, these songs really do define themselves with the simple use of male choral backings and ancient sounding synths. Of course the songwriting is key and less intense vocals contribute as well.

Its interesting going back over these old records of youth with an intention to understand them better. I'd still consider this his finest hour, however its become more obvious how fractured this and the last album are. Different music ideals emerge and experimentation is more obvious. The songwriting at this stage though is utterly remarkable. A definite peak although whats to come is an era I am less accustomed with. I find myself very excited to visit albums that once disappointed a naive younger me, for simply not being like the records that came before it!