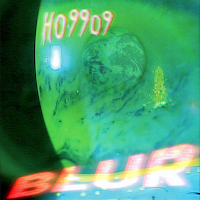 As one of the more exciting acts to follow, the regularity of new material is always welcome. Hot off the heals of Cyber Warfare, the duo offer up another keenly themed mini album to digest. Blur is intermittent with snippets and samples of what sounds like eighties and nineties media hysteria over the emergence of loud and aggressive music in the form of Hardcore and Heavy Metal. The fear and rhetoric feels relevant to their twisted hybrid of dark Hip Hop and Hardcore Punk, ironically the music these talking heads were commenting on is meager and tame in comparison.

These thirty four minutes split along ten tracks feel like a call back to Mutant Freakx and their earlier releases. The bulk of music focuses on slower tempos, twisted and sinister atmospheres built from unhinged beats. Vocally the raps and hooks revel in ambiguity and discernible performances, occasionally lashing out with mean tonged aggressive verse of the Trap Metal variety. Each track is like being dipped into a different dimension of eerie unease as its slowly burns away.

Drifting from that norm, Flesh And Blood has a burst of tempo and Punk energy for the albums shortest affair. With only three tracks led by distortion guitar, Dog Shit takes the cake for being a ferocious riot, unleashing ravenous energy through its dirty riffing. Its brief, housed by samples and the dingy atmosphere the album revels in. Hardcore makes a distinct break from all this with a style and format that ultimately seems like a piss take aimed at Tyler The Creator, ripping off the attributes of his fantastic music.

Compared to the last two stints, it hasn't pushed my buttons as Id like given I am more drawn to their metallic side. It has however been a enjoyable listen with a host of tracks to stuck into but my ultimate take away is the darkly atmospheres don't deliver quite the engagement after multiple spins, it becomes a slow burn as the mystique wares off having deciphered the somewhat cryptic musics facade.