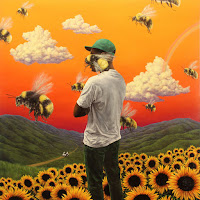 Ive vaguely followed Tyler and his Odd Future collective over the years. Seemingly always in a spot of controversy, Its his music I am more interested in however it only takes a spin to realize his lyrics are always going to raise some eyebrows and ruffle some feathers. As someone who's generally not offended, his lyrics about rape and violence come off as a dark sense of humor and youthful rebellion rather than anything to take seriously. On this record though there is obviously more to take seriously, Tyler expressing feelings of loneliness and supposedly comes out but given his reputation for stirring the pot you've got take it with a pinch of salt. "Flower Boy" is Tyler's fifth album in seven years and to my ears his most cohesive experience with a fruitful production style rich in colorful sounds, melodies and fun.

Although I'm not entirely versed with Tyler's back catalog, this release feels he like finds his voice, maturing, coming forthright and letting down his guard to express his feelings of living in the limelight. Its a refreshing break from the slew of controversy stirring I once knew him for. Although I found it amusing and entertaining, this side of Tyler is far more endearing and sensitive. It would indeed be the ideal moment for him to come out. Given his history, lines about making out with "white boys" could possibly be metaphoric rather than literal but more than likely its him just trolling us again.

His honesty and openness really finds its home in a musically colorful and textured record that brings a wide array of instrumentation and voices together in a fluid and inspired journey that's adventurous, mellow and summery. Even though his maturity may extended to inner doubt and self questioning, the vibes are warm and fuzzy. Lots of quirky, friendly synths and R&B voices join him for a fleshed out experience that takes many detours of the path of verse chorus rap. "Skits" mix in among the songs with context and direction, further decorating this diverse and adventurous record that features a lo of compositional variety and creativity. A great example is "Garden Shed", a slow atmospheric burner that lets a guitar lead, Prog synths and singing, some auto tuned, to come to the forefront as it slowly leads us into one of Tylers best verses of the record.

Currently this album stands on solid ground with me but its been a slow burner, something with depth that's chewy and substantial. I can't help but feel my appreciation of it will grow with time, its a colorful experience and ironically my favorite track is its most contrasting and straightforward song, "Who Dat Boy" with A$AP Rocky, a dark and gritty banger with menacing strings and a dirty sub baseline rocking a traditional son structure. At forty six minutes its a really sterling effort that may go down as the young rappers best.