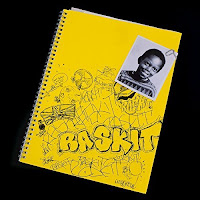 It seems to be a common theme lately that I'm checking in with artists after some absence. Dizzee Rascal's an old favorite from the pool of UK rappers, arguably the biggest to emerge from the Grime scene which exploded well over a decade ago. Its still going strong as ever today but as Dizzee wrestles with in his lyrics, hes no longer the biggest or relevant voice in the scene he once was. Times have changed and after a dip in quality on "The Fifth", "Raskit" is the rascal standing his ground, returning to roots and affirming his relevance after drifting into the mainstream with catchy singles and a weak album. "Maths And English" was my last and I adore a couple of tracks on that release, like the banging "Pussyole", an aggressive, gritty mean diss-track rapped over the classic "It Takes Two" by Rob Base & DJ EZ Rock. That was ten years ago! Time flies.

"Raskit" Is a fun record with meat to get your teeth into on the more topical tracks. Dizzee affirms himself with technically impressive flows and a plentiful passion as he goes hard on the mic with a flurry of sharp, witty rhymes and bursts of tongue twisting delivery. Sturdy from start to end the rapping is flavorful, varied and impressive but lyrically its a little varied. With a fantastic track like "Bop N Keep It Dippin" we go from an infectious hook and deep reflective rhymes on the Grime come up into "She Knows What She Wants", a cheap flirtatious throwaway with irritating repetition and cheeky rhymes. Dizzee takes us on some impressive journeys through his thoughts but also falls back on some light minded cheap thrill tracks too which break up what I think was an important focus for this album, the reflection and introspection he has at this point in his career.

Behind him an arsenal of fantastic instrumentals whirl away with deep spacious, textural baselines, sharp, snappy drums and a rich synthetic aesthetic. The beats sway between Grime and Hip Hop, on a handful of tracks diving deep into classic G-Funk vibes with audacious base grooves and ghetto whistles. Its a riot, an continual stream of beats that dips into both ends of the spectrum with "Sick A Dis" getting its teeth into classic Gime vibes with dirty, disconnected synths illuminating over a lively snap and kick drum groove. Its a stellar setting with variety that's in a jumble across the fifty seven minutes. I personally feel this album has a touch to much fluff that needs trimming out because between a couple of passable numbers there's a goldmine of talent from an artist getting back on it and striking hard.