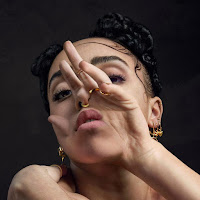 Two years ago there was quite a buzz around this EP. I saw it mentioned and praised in various places and always meant to give it a spin but it got past my attention span at the time. Given a nudge from a reader I made sure to pick up a copy and give it a whirl. The stylized title of capital letters and numbers is simply "Mellissa", a name for Twigs's self descibed "female energy". Released of the back of her debut LP tour, its the third shorter release but my only point of reference at this point in time.

Melissa is undoubtedly pushing into Experimental and Avant-Garde territory as tropes of generalized Electronica and R&B find themselves deconstructed without a semblance of melody, riff or tune in the instrumentals. Convention is pushed aside in favor of soundscape and atmosphere, intricacies of twisting, glitched, manipulated percussive sounds intertwine to dissimulate groove as illusive rumbles and noises groan and drift in and out of focus. "In Time" makes an exception as a soft synth lead churns a simple two part melody through the opening phase of the song cautiously blossoming with expansive, alien metallic synths.

These spacious, paranoid atmospheres create a unique contradiction to the flavorful soft, dynamic and powerful voice of Twigs who's seemingly a talented yet somewhat typical R&B singer. In this environment her voice flourishes as a the soul emergence of beauty. Set in a vulnerable, exposed position, the harmony, melodies and expression in her voice becomes the illuminating chemistry that contradicts its juxtaposition to the twisted, shadowy instrumentals rich in ambiguity and illusion. Its continually captivating but the sort of singing that might go unnoticed in the easy going, popular, formulaic construct usually associated with the R&B style. I really enjoyed one moment where the auto tune was turned on as she drops into a spoken, casual dialect "You've got a god damned nerve".

I'm glad I delayed writing this blog post. After ten or so listens I didn't dislike Mellissa but It wasn't doing much for me. Ive often said repetition is key and in the last few days the musical connection really opened up. All Ive described was always there, just in a less emotional context. As the familiarity settled in the chemistry started to blossom. I didn't care much for the lyrics on the record but as I heard her voice more as an instrument It really started to click. Now both her voice and the instrumentals are a real gem. I'm going to keep listening to this one, and pick up her debut LP too! This record is well worth your time if you like more noise and atmosphere driven songs.