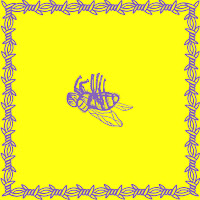 Here on the music blog I have covered all the previous releases from this promising young band."Vile Child" and "Sad Sack" were both equally impressive records that captured the spirit of 90s Grunge yet spun it with their own taste and character that spared them from being seen as a nostalgia act. This limited four track release unfortunately looses the spark of uniqueness as their noisy and textually adventurous aspects of the guitar work are stripped back for a crisper, cleaner recording.

"Be Nice" still has the foundation for the energetic grungy attitude however the climatic moments here are not working. The big howling Post-Rock leads that usual swoon away in these songs can be heard shimmering into the fold but lack a striking melody or aesthetic magic to elevate the song like they have done so before. The ideas are certainly present but going back to old songs like "Burger Drop" or "Trampoline" the gulf of emotional impact is massive. So much magic emerges in those old tracks which are far more inventive than these four which seem to be hedged in by the cleanliness.

Not to dwell on negatives, the drumming is fantastic here, a ton of energy sprawling out across the kit with fantastic fills, rolls and driving beats that really pulled along the riffs, which again felt a little sterile given the clean production. The lyrical themes are decent, musing on relationships and commitment with life on the road. Its really not a bad record at all but I expected so much more from this group and thus disappointment. I hope an album is on the way but if they are gunning for a cleaner sound with less of that big and noisy guitar work I'm probably not going to be keen.