Emperor "Prometheus - The Discipline Of Fire And Demise" (2001) 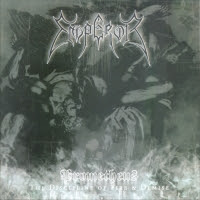 I was never too keen on Emperor's fourth and final full length album "Prometheus" but now that Ive given it a proper listen in recent weeks I have certainty grown an appreciation and fondness for it. Its not quite the calamity I remembered it as, in fact its a rock solid album but one where we hear the character of the band stretched further from its initial identity. Its not to surprising that the group split after its release, the bar had been set so high in the past they could easily go through the motions releasing albums, never reaching that same caliber again. "IX Equilibrium" held onto that original direction but maybe at a cost with the second half lacking. This album however makes to attempt to keep that original spirit intact.

"Prometheus" scales back on the immersive qualities associated with the band and transforms into a frontal beast of forward aggression and direct guitar work which makes for a thick and versatile rhythm section. The drums no longer aesthetic as a wall of cascading noise and more so the structured backbone for the guitar work to mingle its way between. Gone is the power chord shredding and simple progressions that defined their first record, the dexterous intertwined guitar work on "Anthems To The Welkin At Dusk" is at full tilt here with practically every riff revolving around carefully worked overlapping guitars playing of one another. In the low end a lot of chug heavy and grooving picking rhythms define the albums crunchier side. Counter to that most riffs dance their way around the fret board with fast, noted leads and a lot of pinch harmonics, usually left to ring out over the next lick as the twin guitars work off one another in a back and forth manor. its chaotic, fast and wild but in a structured and expressive manor.

Around this aggressive whirl wind of lively guitars, varying degrees of symphonic synths jump in and out of the composition. They sound high fidelity, emulating real instruments rather genuinely. Like with the guitars they become an upfront part of the music, involved in and adding splashes of color and melody between the ever active guitars. Ihsahn's screams are decent, not much to marvel but have a decent tone to them, his clean vocals are particularly illuminating to the songs they grace, occasionally elevating to the King Diamond style seen on the last record.

It all adds up to a solid, memorable record with no particular stand out moments but a consistent adventure through the twists and turns in its fifty one minutes. The last track "Thorns On My Grave" is a step down production wise with awfully over compressed instruments playing at full intensity and continually peaking them mic. Clearly some sort of unnecessary demo track with an unlistenable quality blasting the music beneath into oblivion. A solid farewell from the band.