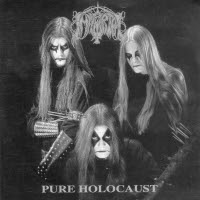 In the infamous Norwegian Black Metal scene Immortal were there from the beginning with a demo tape dating back to 91 and this release, their iconic, identity defining second record, coming a year before the global media exposure that came in light of the church burnings and murder controversy.  Not to be taken seriously, Immortal's image plays tongue in cheek to the seriousness of corpse paint and satanism within the scene. Although themes of demons emerge, Immortal's lyrics and atmosphere revolves around scenic fantasy and nature, the extremes of cold winter weather and war. Its a classic but flawed gem that gets merit for its blinding speed and grinding intensity. Its execution of atmosphere and vision is sublime however the record is rather one dimensional, sticking to a singular principle through the course of the record, however that purity to an idea is in itself rather charming.

Starting with "Unsilent Storms In The North Abyss", a cracking song name, it takes all but eight seconds for the records lunging speed to pulverize as a blitzkrieg snare pummels down with a frighting blast beat. Its stride doesn't let up as the base pedals roll in with an endless momentum. The drumming is unsettled and astonishingly fast, more so for the time but the drums make up a large portion of the bands sound not just for its speed and intensity but its tone and texture too. The pedals are dense, the snare sharp and loose, the cymbals a indiscernible clatter. It all bleeds into a colorless haze of menacing force and power that is a constant persuasion alongside the other instruments.

Alongside the thunderous sound of the drums a thick drone of noisy, sharp distortion guitars paint the icy cold landscapes with their muddy presence. Unsurprisingly they match the whirlwind speed of the drumming with incredibly dexterous tremolo chord shredding that has power chords strumming at a ridiculous pace while they progress and transition through the motions. There's barely a lick of melody, occasional resemblances of a lead above the rhythm guitar and a short solo on "Frozen By Icewinds" that ads a momentary extra dimension to the sound, something that could of featured more. With its blinding speed, narrow, claustrophobic tone and messy, dissonant record the guitars are another cold layer of sound giving birth to a frosty and scenic imagination in their partial ambiguity.

Vocalist Abbath is very much the star of the show, songwriting, playing the drums and bass guitar too. The base mainly adds a warm undercurrent to the otherwise bleak tone, occasionally breaking to add a subtle melody. His vocal style is fantastic, despite being a little stark and laughable his gargling demonic calls play with the higher ranges and have a light growl about them. The delivery is key, always of its own accord and with some light reverb it jumps out from within the frosty cold wall of noise. Its best and most powerful moments come with volume raises and increased reverb for dramatic effect.

I could sing its praises all day and its short comings aren't complaints so much as observations where things may not quite play in their favor. Its a very linear listen, never steering far from the path, no break out moments or change of pace its a continual hammering down of pure darkness. Maybe with exception to "As Eternity Opens" inclusion of what sound like noise choir synths towards the end. The production style is charismaticly raw and unpolished, to the point of leaving in odd snare strikes and symbol clashes that peak the microphone. The band also implore the Darkthrone principle of sudden endings as the ringing distortions are interrupted by silence. These are things I'm not sure I like or not, but one thing is for sure this record is timeless and I adore it.