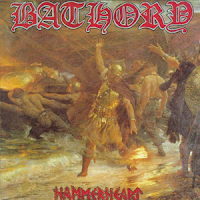 Ones body will be scared by age but so shall the mind! It seems almost criminal that the brilliance of Hammerheart has faded in reputation. Diving back into the Bathory records of youthful years I had somehow lost memory of this masterpiece. Thinking I was on the cusp of unearthing a new glory to enjoy, every track rang echos of a decade past by. Songs unearthed with their etchings still eternal under the dust.

This was the moment Quorthon embraced his heritage and forged a new, remarkable path. Somehow, I remembered this record as a drop off point but in fact these are all spirited songs keenly remembered, including the mighty One Rode To Asa Bay, the only Bathory song to ever be made into a music video if I recall correctly.

Leaving the ferocity of Blood Death Fire behind, slower tempos, brooding atmospheres and heathen choirs accompany a tamer Quorthon who channels his energy into roaring battle cries and off key singing. He conjures the viking spirit with this hard pressed voice that should turn the nose up in theory, yet the genuine passion in his voice pushes the Nordic spirit of the music into a vision coming to life.

Its the final piece solidifying this inspired music of mythic heritage fit to conjure candle lit halls and mighty landscapes of rural natural beauty. Although now a common thing to experience in Viking Metal, this must of been something special at the time of its release. The album opens up with two lengthy epics, Valhalla crashing with lightning strikes into a mountainous passage of drawn out power chords and thunderous drum pounding that sounds practically lifted from Call Of The Cthulhu.

Its a recurring section that elevates the music but also feeds into claims of plagiarism against the band. Something I had yet to touch on but much of the early material is akin to Venom yet Quorthon often claims to have not been influenced by them. It is however a moment of power from the percussive battery and throughout the album tumbling strikes of tom drums help propel these epic and heathen calls to the gods.

Moving into Fire And Ice and Father To Son, sections of dense distortion guitar singularly erupt with a keen parallel to Groove Metal, a genre yet to unfold at this point in time. Its not often the riffs are thrusted forth to the light as they mostly meld with synths to conjure the distinct atmospheres. That measure of fretwork is often subtle but a keen feature throughout. The surprise is these eruptions of meaty groove.

This is a pivotal album for Bathory, being at the forefront of one movement and in one stride to the next, forging and mastering an entirely new sound for the Metal umbrella of sub-genres. Where his last two albums showed flashes of this genius and reveled in a little diversity, Hammerheart is a very unified sound from stand to end that is near impossible to deny as a classic. I am so glad to have found my way back to it!