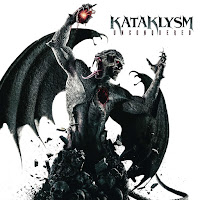 The appeal of purchasing this record was mostly to "check in" with a band from the years of youth. Unconquered is Kataklysm's fourteenth in a steady flow of albums spanning over twenty five years, a competent yet routine production of modern Metal by seasoned musicians with not much in the way of something new to offer. Initially known for their "Northen Hyperblast" take on Death Metal, only a resemblance of the shocking rattle of drums on overdrive that defined them remains. The songs are of course intense in nature, however only one track stood out too perpetuate that distinction, Defiant. Its opening hailstorm of machine gun snare blasting makes for an intensity wall of sound relieved by brief glimpses of dizzying fretwork from the guitars. It tho break to the mid-tempo, a region most the record spends its time within.

Getting onboard with the times the group utilize seven, or even eight string guitars with a brutish tone set to dazzle with a textural indulgence of low and meaty distortion. Its a great sound fit for the groove, bounce of low strings and groan of pinch harmonics wrapped up in the Djent guitar style. It actually came as a shock to hear the embracing of riffs with less of that Death Metal flavor, however there is no polymeasures at play. In all fairness it does not dominate, most songs tend to come with a mix of tonal noise abuse and a shredding of chords more akin to their tradition. The balance keeps Unconquered entertaining on its thirty eight minute stretch.

Luckily for me, Iacono's throaty shouts of forceful anger have a temperament I enjoy. Many of his lyrics that I managed to decipher, however, felt all to chest pumping and shallow. Triumphant threats and statements of violence ushered in with simplistic use of language. Little too ponder on but maybe something to cling to if you can relate it to personal grievances. The lyrical dimension gave me little to enjoy but with a crisp textural production, the barrage of battering drums and brutal guitars timely laced with melodies made for enthralling extreme noise music listening experience that is hard to put down. The record lacks distinct songwriting to stand beyond the norm and given my immersion in metal music, nothing here will root itself in my memory. Perhaps with one exception, the ending to Underneath The Scars has a pretty sick breakdown. The rapid pedals firing in the silence between slams of guitar noise is wonderfully executed. Unconquered is a fun one for fans of extremity but offer little new.