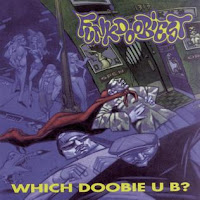 With a recent dive into House Of Pain, I found myself poking around into the production history of DJ Lethal and DJ Muggs, leading me to this West Coast stoner trio with an uncanny resemblance to Cypress Hill, the epitome of treading in their footsteps. Obviously his hand on the instrumentals would lend itself, however lead rhymer Son Doobie, a name I've heard in rap verses before, brings a strong navel inflection and similar set of funky oriented rhymes to the likes of B-Real. Similarities and influences are fine, I was mostly excited to unearth a scene extension of the Hill's dynamic sound. Funkdoobiest have it nailed down, colorful Bomb Squad beats and lyrics constantly referencing the Mary Jane. It's been a fun nostalgia trip listening to Cypress Hill's cousin from round the way.

Although Muggs handles only a couple tracks, DJ Raplh M and T-Ray pick up the slack where Muggs laid down the foundation. Imitating his style, bombastic percussion, bold double-bass lines and stacks of samples making for a madhouse of funk and groove playing from front to back as if he did the whole project. Its complimentary, however a couple tracks are all to similar to Hill classics. Distinction wont come on the lyrical front either, Son Doobie's measured flow, stacking of quirky rhymes and delivery all have a similar cadence that fails distinction. His partner on the mic, Tomahawk Funk, is distinctly reminiscent of Main Source. Having absorbed so much Hip Hop over the years its hard for either them to stand apart.

Not to dwell on the parallels, Which Doobie U B? has a loose theme with recurring references to the doobie question. The topicality feels a shade hollow with braggadocio and stance affirming angles recycled track by track. A read of the track list alone gives you an idea of what to expect. This was never meant to be a serious record though. Its all about the fun rhyme schemes, stringing witty snaps and cultural references to much effect in its best tracks, Bow Wow Wow, Freak Mode and Wopbabalubop. At first its fun and exciting but as the verses become familiar a lot of bold boisterous rhymes fade in interest. Its of the time and somewhat dated but a really good listen as a fan of the era.