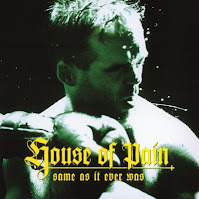 Following up on the debut Fine Malt Lyrics, my memory of Same As It Ever Was has held true. Its a tighter, leaner, hard hitting record with a boisterous gangster edge. Both the beats and rhymes are upgraded to a meaner form of the Irish funk as House Of Pain channel their fun and quirky charisma into a darker temperament. Front man Everlast trades in his card swapping punch lines for substance driven verses. His rhymes are keen and again well pronouncement, even with a touch more grit in his voice as he emphasizes on gun play and violence. It feels less fun and playful, a fraction threatening but mostly a more entertaining flow of rhymes to jive with.
Behind him DJ Leathal and DJ Muggs of Cypress Hill both shape the beats with big bold baselines played up front and center. Punchy, crisp and smooth with the feeling of a classical double bass instrument, they define a lot of the records tone. Paired with keen yet bare percussive loops, a gloomy shade is painted for a serious hardcore platform that Everlast and his gangster leaning rhymes dominates. Hitting of with a string of the better pairings, pacing suffers through the middle, or potentially the strict styling gets a little tiresome. It picks up at the end with Who's The Man, an interesting take on a sample used timelessly by Dr. Dre on The Chronic. All in all its a strong record but heavily reliant on how much you dig this breed of Hip Hop.
Rating: 6/10
Email ThisBlogThis!Share to TwitterShare to FacebookShare to Pinterest
Labels: 1994, 6/10, Gangster Rap, Hip Hop, House Of Pain, Rap, USA
Newer Post Older Post Home