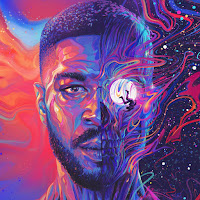 Oh boy do I wish this album had arrived earlier in the year! I can't help but feel It would of made my up and coming top albums of the year list. Right now I'm intoxicated by its particular mood, an airy mix of club and urban street vibes, subdued by its laid back pacing and dreamy, psychedelic tinge. Records like this need time to mature and given how much I loved my introduction to Kid Cudi through Kids See Ghosts, a collaboration with Kanye West, I wouldn't be surprised if this one delivers its magic for time to come. After binge listening for days on end, it still has a sparkle.

Kid Cudi's voice is a charm, soft and moody, he drifts between casual R&B singing, spoken word temperaments and monotone raps all interwoven with spacey auto-tune both flavorful and expressive. Not one to linger to much on lyrics which generally go in one ear and out the other with me, I picked up an introspective individual reflecting on a moment to pause and expresses life with a kind warmness. Anchored to reality in its uplift and happier vibes, the music comes across with a slight sense of melancholy, humanistic and soulful, a connection to the reality that all good things come to pass.

The instrumentals compliment his tone well, these beats are tight and snappy yet spaced out with a keen sense of where silence has power, Quite often do they drop entirely for bars at a time. With a modern percussion design, one might mistake these drums for subdued Trap beats. Although they share some textural similarities the patterns being sparse and complimentary tend to serve the bigger picture, rather than dictate groove and bombast through the rhythmic drive. Behind them, bass kicks articulate the occasional melody and whenever given some direct attention one can really appreciate the art of subtlety at play on pretty much all these songs.

One number that stands apart is Show Out. Teaming up with London rapper Skepta and Pop Smoke it crosses over into Grime territory with a lively kick drum rattling off and grittier raps to lean on a darker mood. It slips in well to the overall tone which is more upbeat, led by Cudi's swooning sung vocals and synthetic backdrop. Many airy synth tones create these easy going atmospheres. Soft organs, choral voicing and all flavors of osculation in between forge a setting for subtle melodies to gracefully breeze with the easiness. A variety of instruments, pianos, guitars and keys give each track its texture and perhaps acoustic guitars that struggle most on Elsie's Baby Boy.

Somehow they seem to rub up against Cudi's voice, his held notes seeming off from the brightness of plucked strings. It illuminates that for all the praise, nothing is perfect. It seems wherever the main formula, which has plenty of variety, is strayed from, things don't quite hit the same heights. In praising the subdued percussion, the rattling Trap hi-hats of Sad People sounds a little grating. As an album it loads its better tracks in the front but given tracks are short and sweet, some not even crossing the three minute mark, its meaty eighteen tracks, just shy of an hour, it gets by as its weaker cuts tend not to linger for long. Given the mellow, indulgent fragrance of Man On The Moon III, it gets by but curation could of really elevated the experience.