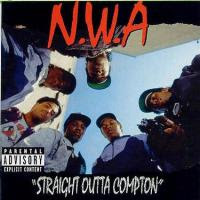 Just about everything that can be said about this records immense impact on Rap and music has already been said. It set Hip Hop on a new path, put the west on the map and delivered us the phenomenal talents of "Dr. Dre" and "Ice Cube" while forcing Gangster Rap and reality raps into the mainstream. If you have never heard of this record you need to do yourself a favor and read about it, listen and love it. Along with Metallica's "Ride The Lightning" I found this record through VH1 at around thirteen years old and it forever changed my outlook and music direction, so for this blog I thought Id focus on how this record impacted me as a person.

Being a relatively angry and frustrated young person I was initially attracted to the aggression and attitude on display, but as I learned the words the message sunk in quick and I found myself envisioning a reality I would of otherwise never know about. The lyrics depicted the American ghettos riddled with poverty, gangs, police brutality and drug problems. It opened my eyes to reality, I had a fortunate upbringing and I was understanding that the world was a big place with many problems. "Fuck Tha Police" was the song that really blew my mind, I had never heard such anti-authoritarian anger and it taught me to question what the police were and to challenge what was wrong and right in the eyes of the law. From that point on I always gave second thought to my assumptions and it set me on a path to be an open and accepting person who looks for tolerance and compassion over prejudice and judgement.

I've never grown tired of this record, there's a ferocious energy of anger and rebellion that always comes across and Dre's beats are still rocking today despite some obviously dated aesthetics the core compositions are fantastic, breaking out of the mold thanks to Dre's attentive ear for sampling music. Its him and Cube that make the record for me, MC Ren holds is own and drops some great raps but its Cube lyrics, also ghost writing for Eazy and Dre, and tireless flow that delivers line after line of Hip Hop's most memorable verses. He's raw and unfiltered, and with time developed his word play, flow and delivery but he could never top the impact and relevance of his rhymes on Straight Outta Compton.

I always felt the best of the record was found on the first three tracks and "Express Yourself", although the rest of the record doesn't fire quite with the same intensity its practically impossible to write thirteen tracks of "Fuck Tha Police" but the reality is they overshadow the rest of the record that's full to the brim of unfiltered reality raps and story's not for the faint of heart. Its hard hitting substance of tough times and reckless attitudes that take it all the way to the final track before Dre and Yella's throw back to their DJing days. Its a classic, one that had a profound personal influence on me and if you've never heard it before you should do yourself a favor.