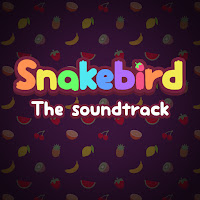 Having thoroughly enjoyed my recent playthough of the addicting puzzle game "Snakebird" I found myself compelled to pickup the soundtrack, which I was pleasantly surprised to find out its free on bandcamp. The hours spent rattling my brain for solutions had been accompanied by delightfully quirky and innocent melodies that got stuck in my mind. This is often the case with soundtracks, but its a sign greatness when you can enjoy that same music in another setting. Whenever I need to knuckle down and do some jobs, "bits and bobs", the snakebird soundtrack is there to sooth and help me focus on the task at hand.

There is not much information available about Swedish composer Carl Karjalainen, but his music speaks in volumes, or maybe lack of. The soundtrack's gift is in its minimalism, its quiet, and what it crafts with so little. Its not demanding, or taxing in anyway and just a few instruments create little passages of time that drift on by peacefully if your paying attention or not. The percussion quietly shuffles along with muted kick and snare sounds that are not to dissimilar, as ambient sounds of waves on the beach and winds fill a void quietly in the distance. Along with a murmuring baseline, the lead instruments sing out chirpy, harmless leads and define each song with a strong melody.

Its music for a setting, music for a mode and beyond that there isn't too much spectacular at work but there doesn't need to be. There are a couple of songs which go for a bit more depth and it dispels the simplicity a little. The last song feels very out of character, but it was composed for the end credits, an attention grabbing song to signify victory over the game. For me this record is a great "go to" when you need something gentle to focus your efforts elsewhere.