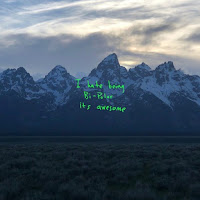 Amidst a wave of controversy, some would suspect he is intentionally mustering, Kanye West releases his eighth "album", a twenty three minute project set to be the first of a string of records to come from the artist and his collaborators this year. Opening with statements, "the most beautiful thoughts are always beside the darkest" and "today I seriously thought about killing you" they will no doubt be spun as controversial by some but within the space of art these statements can bare whatever meaning you think they have, or want them too. One lyric, "Just say it out loud just to see how it feels", is rather revealing of Kanye's current state of mind given "four hundred years of slavery is a choice" idiocy.

The themes of introspection and reaction that courses through the lyrics have a dubious relation to one another. Kanye is no philosopher and many of his statements fall flat. On the other side when he is vocalizing his emotions, it comes of endearing with a weight of honesty, baring open the pains of strained relationships, his ego and status in the limelight. This duality is reflected in the beats, his use of vocals as instruments is ever present yet the songs fall into two phases, that of muted abrasion and aggression in its opening songs, the music then wains into soulful, soothing tunes reminiscent of his roots.

Kanye is known for pushing boundaries and building new sounds but in this instance its another misfire, not quite the same likes of Pablo though. His human side shines through the stormy clouds of controversy, allowing for a genuine musical connection in an among some developing ideas that feel unfinished but at least onto something. Great albums have a feeling bigger than the whole. Ye doesn't, it feels like a slice of time with clear correlations to life as a public figure. Very much a "here and now" record which has its moments for empathy and a slew of unscrutinized thoughts too, including the album covers, a rather hollow statement.