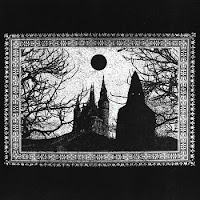 Our journey through the dark mystical realms of Dungeon Synth continues on and this thirty minute project split into two halves is a peach of a find. Hailing from the Netherlands this Dutch musician has been active in the past couple of years releasing many mini albums comprised of one to two songs usually ten or more minutes in length. Each record comes with its spooky artwork of high contrast, black and white imagery using ambiguity to evoke ancient nostalgia. This one in particular sets an unsettling tone, at first glance one might mistake the hooded figure for a tower next to the brooding castle. On closer inspection the ominous black circle in the sky gives one a sense of night time, as if the image as been inverted and the moon is now black, it sets a spooky atmosphere for the music that awaits.

The darkness of the music is not terrifying, or as mysterious as one might suspect, Old Tower is a uniquely meditative and calming experience as its slow, lethargic approach to melody soaks in its surroundings within a low fidelity, reverberated setting. Bold punchy synth tones loose their cheese in the wake of an aesthetic that's mostly akin to hearing a church organ from within the church itself. The naturalistic echo lets notes bleed into the space of a large hall and when instruments layer up their is an emergence of spiritual sound that becomes difficult to decipher yet heavenly in its presence. It takes on a temporal form so to speak.

The two halves of The Rise Of The Specter have clear progressions which we might normally expect to be split into individual tracks, I believe the split may take homage to tape nostalgia and the turning over of sides. Either way the songs go through obvious shifts and some passages drift from the power when composed with fewer instruments, many listens has worn them a bit thin but the middle phase of the first half is a prime example of the magic at work. Slow scaling synths churn over between distant choral voices and culminate to the menacing rise of a foggy, deep war trumpet, setting an unshakable sense of importance to which a second gleaming synth rises over creating an epic sense of scale.

The records vision is particularly vivid for me, on some occasions I see visions of vast ethereal forest and in overs its cliff side castles battling the walls of fog rolling in from the distance. It is however a truly Dungeon Synth sound and can aid ones imagination in visiting the places associated with it. This particular style however comes with a soothing pace, softness and meditative state perfect for a more relaxing and introspective experience that is rather unique.