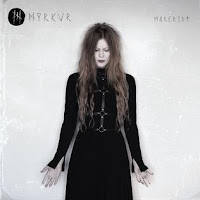 There's always music to be discovered and this year at Download Festival I decided to wander over to the forth stage while grabbing some food and to my delight caught an unexpected amazing show by the Danish group Myrkur. A combination of furious Black Metal and angelic singing played right to my tune, I knew I would have to pick up a record and my first is their second.

Mareridt, Danish for nightmare, reveals so much more about their sound from the live experience, although it is probably a dimension to their sound your just not going to hear first time around at a show. The record however shows depth and emotion in abundance as the contrast between singer Amalie Bruun and her band goes beyond a simple concept and aesthetic, tapping deep into the folk sound of pagan cultural roots.

The record achieves a meditative, indulgent state just at its surface level alone. Steady, naturalistic songs let the light draw to Bruun's singing as she delves into soft angelic singing with accents of Scandinavian heritage, on De Tre Piker she goes all the way in with what could pass as on old hymn handed down through generations, stunning singing reminiscent of Lisa Gerrard. Behind her the music finds different temperaments with the Black Metal aspect of the music finding many intensities to approach from, occasional bursts of ugly, snarly spats of grimness fuel some darkness but more often than not, it rides on the uplifting gleam of awe inspired lead melodies, similar to the epic grandiose scale of an act like Saor. It mostly serves as an aesthetic for the theme.

As the distortion guitars and drumming compete for their moments they sway up again the persuasion of heathen sounds. Violins, harps, modern synths, organs and pianos grip firmly on the naturalistic experience that will have one smelling the outdoors air, feeling the breeze as it rustles through the leaves of tress. One can really feel the spiritual connection to the forgotten past when man was closer to mother nature. The swaying and competition between two sounds gives the album a healthy flow that finds an interesting middle moment on Funeral as Chelsea Wolfe lends her voice to an abyssal, slow, crushing instrumental that could of easily been on her own record. It highlights some similarities but more so adds to the diverse pallet these songs have with one another.

On first listen I felt the Black Metal aspect to be rather rigid and stiff in its volatile phases. I could hear a lot of 90s abrasiveness at work but with each listen as the overall theme became clearer its chemistry in relation to Bruun's voice and the other cultural sounds gave it a far more organic and Post feel. Perceptions change and I am finding myself loving this record more and more with each listen. Its moods, feelings and vision run deep, the music comes to life with vivid visuals of dark and ancient times filled with pagan mysticism.

There is a very personal and mischievous period in the outro track Bornehjem, a childish Golem alike voice talks to its demons, leaving me to believe there is most likely a much more personal theme running through the lyrics, of which I haven't read, perhaps that is something I should make the effort to do. This band will undoubtedly be one of my favorite new discoveries this year and luckily there is their debut record to get into next.