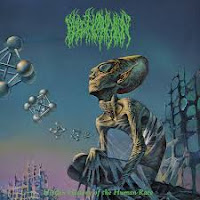 Catching wind of high praise thrown its way, Hidden History Of The Human Race is a well articulated Death Metal record for fans new and old, a bridge between styles within a sub-genre normally tired to the bone after thirty years of evolution that has stagnated in recent memory. Denver based Blood Incantation hit a fantastical stride on this sophomore album, boasting four dynamic, progressive songs, one of which is a lengthy eighteen minute epic that in all reality feels like two songs bolted together through effect soaked acoustic interludes that play up its alien, cosmic theming, both present in the music, song names and on the otherworldly album artwork.

Its Opens up with an aggressive plunge of snarling fretwork deploying pinch squeals, a battering of blast beats and the oldskool roar of Paul Riedl. The groove and bombast lasts but a minute before the atmospheric dimension opens up. Howling guitar leads, frantic drumming and alien melodies drill in its angle before chopping through a riff fest interspersed fiery bursts of guitar lead and crushing growls that permeate the music through its dense reverberations. At times it borders Doom Metal with slow, drawn out groans that brood with intensity in a menacing manor.

This shade of brutality has it all, flickers of Nile, Morbid Angel and Thrash infused era Death show their influences on the guitar work. Whats best is how these songs open up into atmospheric lunges of crawling pace, the percussion breaks down and livens up again in bursts of energy. The albums third song explores these dynamics further with a guitar tone led song, playing into Post-Metal territory as its acoustic guitars get awash in a haze of textural distortion. We even get treated to a flickering of psychedelic old school synths emerging from a foggy synth interlude on the eighteen minute juggernaut. A brief moment but one that signifies all elements have purpose.

The spur of excitement this band conjure is not a short one, every listen has been lively and fruitful. These songs hold up as its alien, cosmic inspired atmosphere holds a lasting curiosity, conjuring mysterious imaginations of what could be out there. It has been a common theme in recent years for bands to play the nostalgia card, yet pulling off truly inspired music. This is another one to add to the pile, Blood Incantation clearly derive ideas, tones and techniques from the greats that walked before them but in this instance they have pulled it altogether with a touch of class felt best in its frequent lunges into shivering atmospheres of alien unease. With great vision and a wonderful execution, the album is one for any fan of the brutal genre.