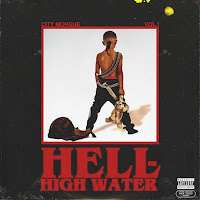 Hell Or High Water is the debut record by the newly formed City Morgue, a pair of young rappers taking a lot of influence from the likes of the uber-aggressive 6ix9ine, who may be the most commercially successful of these "over the top" rappers. The project caught my attention because of its ties to Metal and Industrial music. The pacey, lively instrumentals deploy FL Studio Slayer guitar tones in the meat of their beats. A gritty, lean distortion fit for their overtly hostile and vulgar flows which are filled to the brim with offense and obscenity aiming insults in all directions. The two have a wild, dangerous energy, scream rapping with a menace that'll get you moving.

On closer inspection much of the lyrics are skin deep and more about trading blows than provoking thought. City Morgue comes out the gate with a firm and consistent aesthetic. Brisk, darkly beats, rocking harsh Trap influenced kits and a barrage of sound effects, shouts, screams and back up cries bombard the listener with a restless energy. Many of the tracks kick of with maniacal laughter, a touch of madness sounding like a deranged person who just escaped from the house of horrors.

Despite leaning into these dark themes the music is mostly fun and grooving. A lot of the beats land on the pulse of the groove and make for some careless crude fun. On occasion they even land a fine hook like the "gave hop" call on top of these disorienting instrumentals that rock disjointed samples, eerie urban melodies and dirty sub-bass noise, rumbling below the kicks of the percussion. The instrumentals are tough and if your not in the mod for fowl lyricism then this can be a tough record.

The duo barely let the foot of the gas with the vulgarities and the delivery style is consistently domineering. In some moments the word slurring trend and ambiguous pronunciation comes into play, its not particularly interesting. A lot of this record is relatively mediocre but in the union of parts something quite unique forms. Potential is the word to take away from this. Improved lyricism, better hooks and songwriting would really further this attention grabbing sound. One to watch for the future.