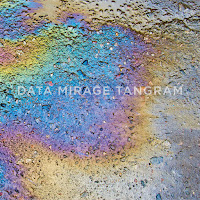 I believe it was David Bowie who once gave props to the Swiz group The Young Gods as a big influence on the Industrial Metal sound. That led me to their TV Sky album and since then I had not explored further. After nine years of silence the trio return with an interesting record that stumbles into pacing issues midway as its quirky atmospheres of subtle psychedelia, dialed down industrialism and lifeless abandon pivot into dull, quiet and lengthy iterations of its initial ideas. The first few tracks birth a sense of calm and obscure loneliness, a soundtrack to isolation on an alien planet. No threat is insight but madness lurks on the horizon of ones mind as the stillness oozes a soft eeriness. Erupting slabs of buzzed out distortion guitars ignite heightened event in moments of upheaval but otherwise the music is very laid back.

Steady downtempo beats set pace for elongated scenic synths to conjure a mood as buzzing baselines and subtle glitched electronic noises make a lining to the structure of its sound design. On Moon Above much of this structure looses ground as the percussion dissipates in a slippery audio collapse. Off beat drum strikes are slowly enveloped by tape stretching sound effects and glitched noises that break apart the song, reaching a dissipating conclusion. Its after this point that the album loses its stride. Going into an eleven minute drone of minimalism, it takes to long to reach its climatic eerie synths being roared upon by assailant, imposing guitars that cut the intended tension with a menacing shrill high frequency distortion.

After this dull escapade the charm returns a little with looping reverberations hooking in psychedelic vibes from the lead guitars in the second phase of You Gave Me A Name. It grows and emboldens with captivating style but it is one passageway in another dull stretch of lucid music. If it had stayed on track this album would be a keen contender for king of its niche vibe but with this lapse of pace in the second half it ends on a snooze. I don't wont to dwell too much on that issue, the opening music is interesting, indulgent and fantastic but as an album it cuts itself short of a fuller experience, dialing the energy down as the album progresses and failing to build on its initial ideas which are impactful when putting the record on for a spin. It has songs I will come back for, but not as a whole.