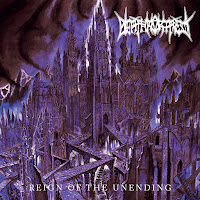 Reign Of The Unending wont be leaving my playlist anytime soon! Its the American bands forth record and after a matter of minutes checking them out, I knew I would adore this. Many spins later I can confirm my continued adoration. Its brutal, ferociously dark, icy cold and unrelentingly aggressive. Death Fortress resurrects the blistering approach to Black Metal once envisioned by Immortal with their classic Pure Holocaust. A helping of loudness from modernized equipment electrifies the shrouded fidelity. With craft and inspiration they forge six engaging songs to make a riveting and atmospheric thirty seven minutes of plundering abyssal chaos.

Its first big distinction emerges past the howling shrieks as indiscernible and guttural, abysmal groans blurt out blocks of ungodly low sound into the mix with only their timing and texture to assimilate. Its not deployed often and is a filthy pleasure whenever the monstrosity is unleashed. The avalanche of unrelenting fury that comes with it is electrifying, a torrent of battering percussive force rains down as the drummer works out anger issues obliterating his kit. The guitars shred away frosty tremolo chords with tendinitis educing intensity and shivering tonality. It all blurs into that engulfing bestial fury of the most extreme degree, Black Metal at its finest!

Death Fortress really understand the dynamic of this sound, what little "melody" that emerges through the wall of sound has a fantastic poise of mystique and aggression that conjures an unsettling atmosphere of forbidden magics and maleficent being from worlds beyond our own. Its not all relentless punishment, the songs develop with varying intensities. Monolith Winter makes a remarkable journey from an ice blizzard start and steadily tones down its blast beats into fill laden grooves as the lead guitar builds a sense of scale that grows and blossoms. The final song Wrath Of God raises the stakes with an epic, dynamic track, bringing out those plucked chords in true Immortal style and a little hint of Graveland triumph too.

Any "lack" of originality flies out the window for the stunning execution on display. The band need not to hide their influences for their inspirations has led to brilliant music. Reign Of The Unending is a class act that revives that incredible energy Immortal deploy. I haven't heard another band even come close to it before. Dare I say they even match it? I struggle to find any complaints on this release, perhaps one or two of its lengthy songs drag their heels but otherwise its been an absolute pleasure to indulge in. As mentioned above this audio torture wont be leaving my ears soon!