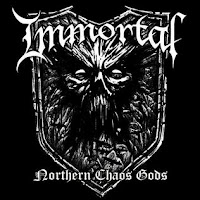 The return of iconic Norwegian Black Metal outfit Immortal is now upon us. They truly are the gods of northern chaos and this mighty ninth chapter in their story has been a shock on two levels. Firstly the surprise of its release, living up to the name, sound and reputation of the band. Secondly the fact that it exists. Last I heard of Immortal Abbath had left them over legal issues and produced a solo record totally akin to the Immortal vision. It seems that Demonaz has stepped up to fill his boots. Once the guitarist he was forced to take a back seat roll as lyricist after the punishing speed of their music took a toll on his tendons. He is now back on the guitar and in control of the rights to the bands name, this is his testament to their sound.

Demonaz has no issue replacing the legendary Abbath and that's no dismissive statement. He has big boots to fill and somehow the music retains the same breed of beastly cold, icy onslaughts of shapely guitars and demonic snarling in the form of shrill screams and throaty roars. The themes of Ravendark and Blashyrkh return again and the song constructs and progressions feel perfect. Where Mountains Rise deploys its acoustic, reverb soaked guitars, the same tone is achieved as they have done before. Everything is just as you would expect, right when you might anticipate it to be somewhat different given the personal change.

With modern production and a nine year gap between records the groups aesthetic is the best its ever been. The harsh, dense, ravishingly cold and cruel guitar tone puts forth a biting meaty fuzz of blitzing power chords and savage tremolo picking. It plays in parallel with longtime drummer Horgh dizzying assaults on his kit as blast beats and crushing grooves reinforce the dynamic onslaught. Through it all the demonic cries seek us out through the icy cold blizzards and their breed of Extreme Metal is a alive as its ever been, this record does all that Immortal is known for.

With so little done wrong, one can only imagine what some experimentation might have done to their sound. All the riffs and drum patterns fit snugly into what the band have previously established and so its ultimately the execution that is impressive. The chops and churns of pace, styles of riffing and momentum shifts all have echos of past records. If your a fan who wants more of the same, this new chapter gives you exactly what you want. If you were hoping for an new avenue for the band to walk down, this is still a pretty sublime record and I can't recommend it enough to fans of Black Metal. What a treat its been!