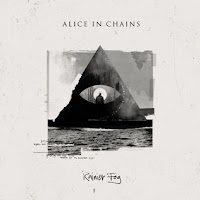 There is so much that could be said of Alice In Chains and their history. To boil it down to some specifics, they are a a legendary band from the Grunge era with a metallic tint in guitar tone who lost the iconic voice of singer Layne Staley to extreme drug abuse. Reforming a few years after his death they somehow found a vocal harmonization with new singer William DuVall that resonated on the same frequency as Layne. It allowed them to continue along the same spiritual path laid out on prior records and after five years their return with their third album of this second stint for the band.

I have a strong fondness for their last two records, the five year wait has been worthwhile but Rainier Fog pulls no new tricks. It may explore some heavier guitar tones and grooves but very much plays like a band who are comfortable with their identity. They have taken the time to reach in deep and curate the very best of their inspirations and form a fine craft of songs that hold your attention and move your emotions for the steady fifty three minutes the ten tracks make up together. If it does offer any new spice, slower tempos hint at some Doom Metal influences but its a side of them that just seems more prominent for this project.

Its pace is sturdy, slow and soothing yet momentous and empowering. The atmosphere they conjure together is sun soaked with a streak of introspection bordering on melancholy. With a gorgeous production aesthetic Jerry and William weave their vocals around one another to constantly illuminate the music in electric tandem. The guitars relish this opertunity to flex in the directions Alice In Chains are known for, finding some laden, steady grooves and stretching to the slow and sombre acoustic epics with all manor of lead guitar breaks stitching in the details. Its a lively, animated record in the energetic moments they often leads too. When in a more subtle position it still retains these big and strong atmospheres that engulf the listener.

With each listen one comes to know the songs better and as each rotation revolves the character and identity of these songs really lights up, especially the second half of the record. This is the kind of curation that can make a known sound exciting however that may be this records only flaw. Its a fantastic set of songs but has no surprises or unexpected directions. The music in no way cries out for it however it makes me wonder if the band can keep making this well established sound work? They certainly have done this time around but you will know what your in for.