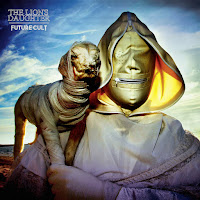 With every listen Future Cult has crept deeper into the conscious, its harsh iterations of Extreme Metal and obvious synthetic experiments have yielded charm in their familiarity. What was initially a wretched experiment of clashing styles found its territory as the repetitions revealed the chemistry that's not so always apparent. The Missouri based Black Metal outfit jump the bandwagon and fuse elements of Synthwave and this surge of interest in Carpenter horror soundtrack aesthetics.

The band have a harsh aesthetic, readily reliant on the pummel of blast beats and angular discordant guitars, commanded by the flat and narrows shouts of singer Giordano. The best bits emerge from the moments between when intensities wavier and so its harshness serves as that root into extremity it frequently turns too as the music drops in and out of its anger. In these fluctuations the trio prime the atmosphere for the music to break to its more meaningful and progressive passageways which give most the songs here conclusive moments of dark illumination.

The retro synths would fit sweetly into a 80s horror soundtrack but not so much in the case of this mid paced metallic pounding. Instead of sacrificing their harsh and assaulting aesthetic and jagged music to fit the synths in, the three let them rub upside. The clash is obvious yet the charm is in progression, how the music finds its way to more cohesion, the brutality sways into chemistry and that is their sweet spot.

The introduction to The Gown highlights this chemistry as the dialed down guitar tones work with the synths through an initially percussion less instrumental in perfect tandem. The texture and atmosphere oozes over the warm, burly baseline. As the record stretches on a couple of tracks cop out of the experiment with the synths being pushed deep to layers of grit and fuzz heard in the creeks between thick distortion chords. The do however remain as solid songs in the run time.

There is definitely something to be done with these two styles. The Lion's Daughter have dipped their toes in and proved the waters warm. However my take away from this record is their musicianship, more so than the aesthetics that often feel rigid and raw. The synths could easily be swapped out for guitars and retain the same atmosphere as I felt their dark avenue is what shinned more so that the Carpenter accent. I hope they continue on this path and push the fusion further.