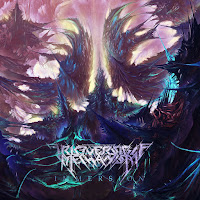 Over two years ago the Belarus duo Irreversible Mechanism's debut made quite the footing in the musical landscape of my mind. Their take on Symphonic Extreme Metal had many of the hallmarks similar to bands I adore, I could hear echos of Dimmu Borgir, Old Man's Child, Aeons Confer and Abigail Williams. It became a record of frequent returns and so my excitement has brewed in anticipation of this sophomore album. Although it sticks to similar classifications, Immersion is an evolution of the beast and I'm not entirely sure where I stand with it. One thing is for certain my captivation has been held over the weeks as I have strayed of from writing about it, soaking in the experience as many times as I could before now.

This new record expands its pallet with the introduction of luscious, gleaming acoustic guitars reminiscent of Gru. They work in parallel with deep, soft, airy synths boasting an immersive spacial tone. It plays between the dynamic bursts of explosive drumming and distortion guitar onslaught that drifts keenly into angular and blunt force playing akin to Technical Death Metal. The blazing dives into pummeling intricate blast beats and maddening atonal fret scaling licks push at its harshest but also in a constant sway with the synths and ethereal guitar sounds that vastly expand the pallet with plucked chords and softer distortions to thicken the atmospheres cast.

Where they once had echos of other bands, Irreversible Mechanism have very much channeled the aspects of their sound to new places. The once typical sweep picking licks that flooded the music with melodic flushes has been channeled into a web of meaningful guitar leads and solos that organically flex with the swaying of the music, erupting to life in with the dynamic shifts in tone. Their talents as musicians has found a vision and its executed wonderfully in a set of nine songs that frequently shift, sway and unravel with its smothering of intricacies and complex song structures leading into new and marvelous frontiers that feel boundless in this form.

Its a complete package, the music is thrilling with its extremities and its aesthetics are gorgeous. These modern production techniques sound is if there is nowhere left to go. Packed into this production we hear every kick, snare, symbol and instrument with clarity as they all frequently pile into the fold with a frantic unleashing of extreme composition. The drums pack a hefty punch, slick tones on all its components let every note cut through with strength that compromises nothing. All the way down to the bass guitar, which gets its moments to rumble its texture, every sound illuminated.

And so the album cruises on by with its unending sways, exploring different degrees of parrying assault and indulgence with its two identities. Beyond has both my favorite moments and least too, its swings of gleam the most appeasing and its dive into Technical Death Metal the most grinding. Tracks like Absolution is a, mind the pun, absolute peach when the back and forth is frequent and lined with glorious, emotive guitar leads. Infact eight ninths of its whole fit that frame, constantly finds these energetic thrusts to soaring peaks of intensity and blissful color on practically every song while each one feels so unique.

Taking all this wonderful music in I do feel an ambiguity of vision. It reminds me of my experiences with Doom and Post-Metal. I can feel the electricity but it doesn't allays light the bulb. With every song here I feel the current but where is it we are? I'm not quite sure, I mostly see neon colors illuminating solar systems and bizarre, exotic alien planets with intense visuals but perhaps that was put in my mind but the fantastic album cover. Either way this will be one of the years best and one I will continue to enjoy for many years to come! Bravo Irreversible Mechanism, you have raised the bar for all within your field, this is a true accomplishment.