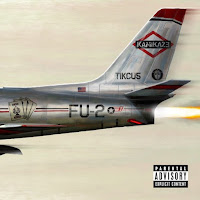 Kamikaze may just be the most fitting, self descriptive name for this surprise album. Dropped out of the blue a couple days back by the one and only legendary Eminem, it responds to the general disappointment and fallout of last years Revival. The shock and surprise of this mean, gritty record taking verbal aim at anyone nearby has Em painted like a wounded animal, lashing out as his frustrations with the changing landscape of Hip Hop pin him in the corner. His state of mind manifests before us into a Rap fest of disses and vocal prowess. He's like the deranged tyrant on the throne, no one can deny or challenge his position at the top, yet his verbal trajectory of insults is unlikely to harbor any new fans of friends.

Once again Eminem is stuck in his reactionary mindset. It was once the cutting edge back when he was public enemy one on the Marshall Mathers LP. His position has changed, reputation established and undeniable yet here he is lashing out at Mumble Rappers and artists with different styles. It paints a sour image of an aging artist, out of touch yet one can not deny how wonderful his flows and creative is. The record has its moments of pure brilliance, Em even takes on his despised triplet and choppy flows to flip them over, load them with lyrical substance and spit them back in the face of those he goes after. He does however drown in a plethora of tasteless slurs and swears that weigh down the genius behind the rhyme.

Breaking down the lyrics, which run deep, we find regards to Kendrick Lamar, Big Sean, Logic, J Cole, Joyner Lucas, who is featured on the track Lucky You. On the other end of the stick Em goes hard at so many rappers its hard to keep up. Machine Gun Kelly, Lil Pump, Lil Xan, Lil Yatchy, Earl Sweatshirt all get caught in the crossfire. He also takes aim at Tyler The Creator using the word faggot. Given these times and context it really does him no favors and comes off as poor taste. That was disappointing, yet "Not Alive" had me in hysterics as Eminem and Royce Da 5'9" mock the Migos Bad & Boujee flow, its hilarious but simply redundant. Drake also gets accused of relying on ghost writers and Em goes rather pointless into number comparisons, which he also extended to music critics making views off Revival.

Its really just petty, yet delivered through the lens of supreme talent. Behind the lyrics there is another layer of madness as some beats resemble the modern trends Em criticizes himself, however it may all just be playing into the mockery. One notable thing stand against this, Em constantly uses the Drake "Yuh" prompt before rhyming... Its so distinctly alike it just seems strange. Tracks like Nice Guy & the second half of Normal resurrect some classic Eminem vibes. Lucky You is dominated by its features and modern aesthetic, it barely sounds like his own track. To say the least the record tends to go all over the place as his sounds play around with new ideas too.

Beyond the attention grabbing tracks his lyrical content hits and misses with a variety of topics. Hearing him address the D12 situation and run through his thoughts was well executed yet not every song hits that grade. The content fluctuates as does Ems flows, dropping some excellent rhymes and patterns alongside some belly aching cringy lyrics and plain schemes. At other times it loads in so much its difficult to unpack. If one thing is consistent, its a lack of hooks, the best he musters is the Migos own Not Alike flow and groove, ironic of course. Em also lashes out at the new generation not respecting the old guard, his actions will do little to change this.

Ultimately, this record is as described, a kamikaze. Its hard to see Eminem reclaiming his place at the top again, even when working with Dr.Dre. Given his attitude to the state of Hip Hop he comes off like a sinking battleship landing missile strikes as it goes down. Its the best we have heard of him in years from a technical perspective yet when not striking out a fair bit of the topics arn't engaging and with a refusal to change with the times little excitement is stirred unless hes angry and viscous. I can't see him coming back from this unless he finds a new source of inspiration... Also I can't leave this blog without mentioning the Beastie Boys and License To Ill, there it is!