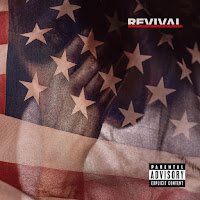 It feels crazy that I've never written before about Eminem on this blog before. He is pretty much thee musical name of my generation. Making his break around the millennium with Dr.Dre at his side, the Detroit rapper rose to phenomenal levels of success no thanks to his unrivaled talent and unique persona. I fondly miss the self loathing days of Slim Shady, the adopted rap personality of a desperate individual, framing his suffering on stage to the point of self mockery in an unwavering drive to make it in the Rap game. We've come along way since those early days, I checked out after Relapse, Em's reinvented self not quite to my taste. With sparks like Rap God on his previous record I found myself very keen on hearing this next chapter in his story.

Opening with an intrinsic string of words to set tone, Em's mission statement raises the bar high for a musician who constantly doubts himself in a pursuit of perfectionism. The sounds of paper ripping between his words of anguish paints him as a failure in his mind, perhaps disconnected from the reality that his name like his will always feel relevant in music. It gives way to more self indulged lyrics that come off sharp as snappy the snare which he rides with a jolted flow. Moving into Chloraseptic he hits the mark, turning to fiery spiteful battle raps over a viscous slick beat but after a tight, witty opening verse that swiftly subsides to a string of crude, sleazy rhymes.

Tracks like Untouchable and Like Home go in hard and political, Em getting fired up in defense of Black Americans living in institutional racism. He makes no mystery of his liberal leanings here, his rage and anger fueling strings of rhymes to serve his message as he takes shots at president Trump and republicans. Hes frank and blunt, spelling out the situation as he sees it raps that seek with others to take side with him. These topical track are far more meaningful and relevant with much food for thought however that probably depends on if you agree with how he sees the situation.

The focus shifts around through the track listing, Remind Me and Heat stick out as throwaway rump tracks with spews of crude and lewd lyrics that border on childish at times. Em jumps from topic to topic with old themes cropping up, revisiting his struggles with Kim. The three closing tracks are rather endearing, they play like another chapter in a chronology of songs about the unique relationship he has with his daughter Hailey, always fueling a deep passion he can't help but put to the microphone. His regrets and conflicts culminate in a musical suicide attempt he raps his way through the consequences as he perishes away in hospital, a very Eminem therapy style of song, ending with a hint this is his last album as they throwback the beat.

There are flashes of his brilliance littered and his talent props up a lot of lack luster topical schemes. The first listen through felt fresh and exciting, a lot of his throwbacks to themes from his roots really drew in a distanced fan. His loose mouth and shots at Trump felt like the rebellion I expected to hear from Marilyn Manson who dropped the ball on relevancy. Unfortunately a lot of the tracks fell through on the second and third spins before much of the record felt tired and spent. A lot of this could be down to the weak production which is in all fairness well put together but behind the curb of excitement with dated ideas, even more so with the inclusion of his collaborations.

Eminem had so much to say and prove in the naughties but now he sounds trapped in the same internal struggles, the difference is he believes its now all his too loose. The irony is the albums best comes from the most personal themes we've heard before. There's an EP's worth of good here but this material is loosely stapled together with sub par songs, fluff and seemingly name sake features to bolster his reputation, I think only Beyonce and Skylar Grey made a positive impact on the music. Other features like Ed Sheeran felt very positional. Mildly disappointing, some good things to take away, I just hope that Em doesn't give up on trying to hit the mark again.