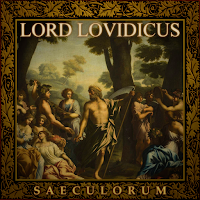 Upon seeing its sacred, biblical art album cover I was overcome with excitement, Lord Lovidicus has been one of the most interesting artists to follow over the years. Progressing from decrepit visions of mysterious, nostalgic Dungeon Synth, evolving the sound to lush and serine compositions of runic magic, his music has been painting vivid and uplifting visions of ancient cultures. That path is probably why I found myself instantaneously understanding what this record was about, its cover a perfect fit for the music behind the facade and an inspired step forward for the artist.

More than ever does Lord inch closer to the realms of whats unfortunately generalized into "video game music". To more accurately describe the style, its akin to scenic soundtracks of dragon-born kings and fairy-tale lands, the likes of Skyrim and the other Elder Scrolls games. I think Lord's vision here is more likely to be routed in the Roman era with the Latin title signifying the length of mortal life and its two songs, split into smaller tracks, Latin for gold and silver. Whatever its inspiration the music is majestic, yet cultured and very much romanticizes with a forgotten civilization.

With soft and simple stringed instruments, the cries of trumpets, horns and the occasional pounding of war drums, the opening track Aurum has an uplifting gleam of might about it as we travel on a timely adventure across lands. It climaxes with the wonderful Saturunus Dethroned, making its mark with an intriguing pallet of arcane choral synths that meld human voices with the gods, as if calling down from the heavens above. Argentum paints a similar cultural vision of splendid valor from the upper echelon of society, its glory and wealth soaring its way to the clouds above. That is just my interpretation, I picture scholars and politicians lavished in white robes, gazing on grapes, lounging in serine gardens as they indulge in conversation of primitive philosophy as adventures explore beautiful scenic lands off in the distance.

The aesthetic value of the music is carefully poised. It sounds fit for the rich and lavish production a studio budget could afford yet resides on basic midi tones dressed in soft reverb. Its just enough to capture the majesty the compositions behold. The music shines brightly through it with this pallet of instruments however it in some moments becomes crowded in layered crescendos and some lighter compositions like Rivers Of Nectar sound a little exposed when only two instruments are in play at once. Its nothing to complain about, the whole record is spell bounding with impressive song progressions and structures that show Lord is continuing to both evolve the sound and grow as a musician.