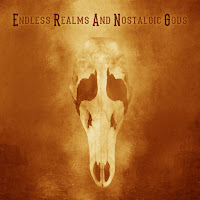 The saga continues, Erang emerges once again from the shadows bearing a new beast. This self titled acronym marks a longer break than usual between records with it being the first to arrive this year. At thirty one minutes its a short and sweet affair that musters a new cultural energy to redefine the sound, yet fit firmly into the identity built over the years. On Endless Realms the wondrous melodies and timely instruments that so often conjure the magic take a backseat to the power of atmosphere as the subtle and subversive dominate the moods that flow forth.

Wandering through domineering settings the records most defining music occurs as atmospheres brood and swell in the absence of obvious melodies. Textural sounds of wind and weather accompanies the slow groaning of horns and archaic voices lost in the distant whirl of wind. Rumbles of bass and sounds of metallic echos enforce a desolate environment as eerie synthesizers gleam in mystery. When in this mode the use of lightning strikes and environmental sound effects go a long way to paint a picture of the scene and setting.

Only in bursts does the record step truly into these atmospheric passageways, a lot of the record swings and sways between the charm of fantasy melody and thus gives it an exciting amount of variety that is held firmly together by recurring tribal vocals that sound very native American to my ears. Some of the vocal performances are very powerful, impressive and deeply humanistic. I'm assuming these have been collected from an archive rather than impersonated by Erang himself.

This mixing of styles and transitioning between approaches does have it shortfalls. The vivid and intense track The Drunken Marshal misses out on its own power as the opening atmospheric piece is shortly transitioned to a juxtaposing release of introspective, mysterious, astral electronic melodies. Both half's feel as if the magic they conjure is short lived, the ball gets rolling and in its peak the mood is cut off.

Voice Of The Wind and the opening song make great use of dirty, rumbling guitar tones and again muster energy from the textural, aesthetic experience which really comes to fruition on this project. Overall the albums path feels a bit mixed and not as precise and formulated a vision as Songs Of Scars is but this new avenue of dark atmosphere mustered by subtlety environmental sounds is invigorating! Ive always thoroughly enjoyed those types of dark ambience projects and it seems as if Erang can work this angle too.