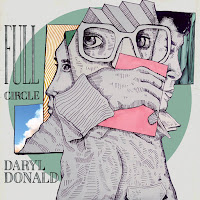 A second release this year from Scottish producer Daryl Donald brings us another cut of smooth and mellow Jazz Hop beats lined with thoughtful vocal snippets to induce a relaxed mood. By now its become predictable but the best kind. Its a prediction that one can feel cozy and wrapped up, snug and warm inside this world of breezy cool instrumentals that groove easy temperate drum samples under atmospherically arranged samples of calming, soulful and jazzy instruments.

The beats are short and sweet in nature. Being looped and highly repetitive, a balanced is struck as lingering on the theme is avoided. Experimenting with gentle noise, each track has some subtle ambiences, conjuring shapeless forms of ambiguous sound to decorate the main loop. It works fantastically and if absent a vocal feature can drift in with the same breezy easiness that makes this record a pleasure to mellow out to. Its words had less of an impact this time around, but its experiments in ambiguity spark quite the intrigue to their origin.

With its overall swift nature, Get Alive stands out as an odd cut where the audio fades out abruptly jusr as the beat just gets going. Otherwise its a slick flow of cohesive musical grooves. The opening tracks are particularly reminiscent of early 90s Jazz Hop classics. I couldn't put a finger on which tracks but they had a fond familiarity. The closing tracks however pivot to slightly snappier percussion with a soft crunch added to them. Its a gentle transition, just something I noticed on this short album that delivered exactly what I expected but still charmed none the less.