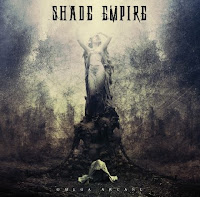 I've sunk my teeth in deep on this one, enjoying its immersion over and over. Some albums present a charm that once familiarity sets in it can vanish. In the case of Omega Arcane it has a gift that will keep giving for years to come. So rather than write up my thoughts on this excellent record, I thought Id keep it in rotation for some time longer and with that has come a great appreciation for this meaty CD filling seventy four minutes of Orchestral Black Metal. Hailing from the UK, Shade Empire have out done Dimmu Borgir at their own game, specifically the Abrahadabra era where the Norwegians steered their iconic Symphonic incorporation of keyboards to actual in house orchestras. I do however feel they lost their charm in this transition.

Alongside the commonplace barrage of relenting blast beats, howling screams and aggressive guitar work, Shade Empire deploy a range of tonality in the symphonic avenue. String sections, brass instruments, trumpets and horns, even striking orchestral drum strikes. It has a rich depth that effortlessly blends into the metallic cascade of intensity. This also extends into more typical keyboard synths, electric pianos and on occasion furthering into the tonality of synth led music as no idea seems out of reach if it fits the billing. Its best heard in interluding journeys where drum machine deployment reminds me of the E.S. Posthumous fusion of Classical, modern indulgent Electronic elements and atmosphere aiding drum machines.

This superb cohesion provides stunning depth with its rich layers of symphonic sound, underpinned by the crushing pummeling of crunchy guitars chugging tempered grooves. The slick rattling of rapid, dexterous drumming shudders like a pulse, slaming through it all with a commanding guidance to hold everything together. Its all rather intense, with each instrument the potential to overpower is present but they slickly achieve a balance and let the musical writing beneath elevate the aesthetic chemistry. The screeching vocals too have intensity but fortunately variety favors as deep guttural whispering tells tales, playing up the epic fantasy narrative the record has in droves. With a few voices at play, it shapes up well, avoiding staleness.

With such an engrossing musical construct, everything is set in place for endearing song writing to play out a rather diverse set of songs that meet in this fantasy realm of snow and storms. With many measures of temperament the songs can shift intensities while never letting up on a luscious layer of orchestral sound. It all feels rehearsed to deliver stunning swells of emotion as the so called crescendos and peaks seem to roll out in frequency. Its seventy plus minutes never seem to drag feet, each track firing up its unique take on the pallet available and with the start of each new number comes the reminder of the moments in store, yet to unravel there treausres. It also arrives between slews of ambience leaning atmospheric passageways that enrich the theme.

So far its all been praise and the reality is I can't think of anything to criticize. At first I may have had thoughts of preferring certain ideas to be executed differently but with time absolutely everything about this record makes sense to itself. There isn't even think there is a song worth gutting, the bar of quality is that high. The best tracks are however rolled up in the albums opening but even at the other end Slumbering Giant and the title track are very convincing songs that have just as much immersion.

What we have here on Omega Arcane is an excellent execution of intense Metal music but also a true understanding of the orchestral, electronic and atmospheric side. It feels like a mastery from its both perspectives, perhaps more so the latter. Rather than being used as an accent or aid, this thematic avenue has been fully realized. The chemistry between its two sides is sublime, that's where it stands apart from others who lump in synths as a layer of color. This is a gem I'll cherish for times to come!