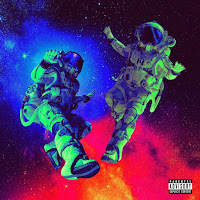 Of the handle of spins I've given this one since its release, I'm left with little positive to say. I'd checked out Future before, a big name in Trap music, very much enjoyed his approach to the sound. Lil Uzi Vert is one of the more exciting modern artists, his Eternal Atake that dropped earlier this year was mostly disappointing but had some undeniably interesting stylistic choices in its opening third that I'm still enjoying when they pop up on shuffle. The two coming together under this florescent space themed album art was enticing but across its sixteen tracks nothing matched the curiosity invoked by its trippy record cover.

If a theme is present, these instrumentals do have a flavor detouring from the club and street vibes but holding all of those conventions. My cosmic leanings are more to the liking of an Aeons Confer, however for fans of Hip Hop I can see how this has an astral tone softly worked in there. Either way the beats handled by an entourage of accompanying producers are this projects saving grace, if it has one. Deep, slow subdued bass grooves, rattling hi-hats with shuffling inflections and timely pedal kicks prop up the framework for loose fitting samples and soft instruments to play out laid back melodies. Its a moody design for the backdrop, laying down the vibes and rarely pushing bold leads or musical hooks upfront.

This sets the stage for Future and Lil Uzi Vert to shine however both seem to be on autopilot as not a single track brings anything of worth verbally beyond the river of self affirming swagger. Perhaps the pacing of some flows and auto tune accents bring a little excitement but on the lyrical front this project is hollow. Its unfocused braggadocio at its finest. An aimless stream of consciousness rapping revolving around sexual exploits all to often. The rhyming is lacking and so many lines set off alarm bells for the lack of self filtering. There are countless lines that "work" but for what? "Bitch I'm plugged into the wall like a phone charger" after rhyming the word charger twice already seemed like a low point. However there are plenty of lines like this through the record that should of been trashed.

Its hard to hate on an album and that is too strong a word anyways. Every record I buy with love, I want to get into music, not find myself walled out. These two are both capable of so much better and there coming together seems to be without purpose or intent. Their union doesn't yield anything of artistic note. Instead it just seems like a run of the mill, autopilot creation. I'm sure they enjoyed themselves putting these tracks together and speaking their minds but as a listener this really lacked anything of merit. Even though the beats are competent its hampered by these incessant vocally manipulated voices that say little of interest and the whole thing quickly becomes a dull drone in the background.