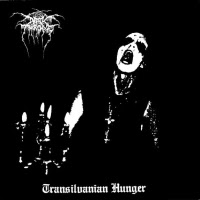 On their previous record "Under A Funeral Moon" Darkthrone created a purist record that pushed musical boundaries in an "anti music" rebellion against traditional norms, even within their own emerging scene. At the time it must of been hard to conceive the next step but somehow the duo managed to take their sound to new frightening extremes. "Transilvanian Hunger", their first as a two piece, would take on three distinct progressions that set it aside from its predecessor and defined it.

The most obvious, and immediate characteristic is once again production. As if the harsh, colorless pallet of sound wasn't cold enough for their taste, Darkthrone pushed hard with a mix that removed the high end frequencies entirely and squeezed all the instruments into a memorizing haze through the mid and low ranges. Its a shrill wave of noise, narrow and claustrophobic, frightening and haunting as this dense hurtling wall of noise plunges us into the depths of a frozen hell.

The next trait may not be a rebellion, but certainly comes across as one. Switching from English to Norwegian lyrics would not be an original idea but certainly further alienated their music and added a element of mystery to foreigners listening in. Many of the vocals are already difficult to decipher as is, the language adding an extra barrier in the extremities, with exception to the title track and a few other lines that are in English. The title tracks lyricism is gloomily somber, a hopeless romanticism with cold and chilling misanthropy amplified by the bleak and pale music.

Behind this wall of sound and imaginative mystic lyricism lies an impressive take on the simplicity of progression through a singular line of direction. With an onslaught of rattling, whirling, never ending blast beats and mirroring base, the guitars leads us through a single dimension of sound, focusing on simplistic power chord shifts and the occasions whiff of a cold lifeless melody or frantic injection of inaudible solo leads. Through this harsh sound and linear approach to songwriting we journey through the expanses of the cold and dark side of natures cold and unforgiving reality. Keeping the listener locked in through pummeling repetition, a simple riff change can sound monumental, reminding me of the overall experience. Through so little can be delivered so much in the imagination that a peak of light shining through the keyhole sparks, wondering whats on the other side.