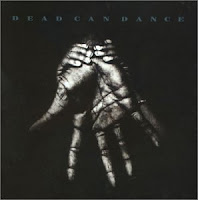 After a string of five records, Australian duo Dead Can Dance take a little longer to get their next effort out with a compilation released just a year after Aion. It follows a familiar construct of the two exchanging the lead roll as a sole voice over enchanting, cultural instrumentals. Two mesmerizing accapella's make an appearance in the eleven tracks mainly distinguished by an Mediterranean persuasion. First heard in slapped bongo grooves and steady tambourine alike percussion it grows with the record as the melodies feel increasingly sun soaked and the rich tapestry of instruments grows increasingly exotic and foreign with a desert sand tinge.

Its mostly Gerrard who indulges in these traveled voices. Sublime might be an understatement, her singing was under no contest but one has to be taken back by the cultural echos she inhabits with an ever expanding set of voices. Rich in texture and flawless in execution a emotional resonances illuminates her songs. Perry on the other hand often pulls the record back to the mystical, fantasy, medieval side of their sound, choosing to sing on the tracks rooted in sounds previously explored. They two are equally enjoyable but certainly fitting into whats been heard before.

Into The Labyrinth has little surprise. The excellence and inspiration this band can achieve is performed again and perhaps where they could of fully dove into new territory they have tread the lines between two strong ideas for an album most excitable when exploring the aforementioned cultural sounds of heated climates. With balanced measures of complimenting instruments, they once again muster together another set of magical songs to transform your imagination and take you on a journey through other worlds, times and beyond.