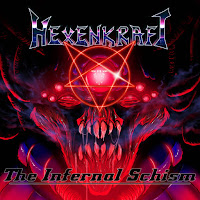 The Infernal Schism is the second mini album from Synthwave outfit Hexenkraft. Its a pivot from the genres tropes to a far more fitting direction. The diabolical theme, present in name, presentation and sound, finds a different temperament across its five tracks. The pulsating, energetic, oscillating synths are deployed at a steady pace with a target on atmosphere and scale, as opposed to high octane onslaught that came before. Gone are the driving, thudding kicks and cutting snares of club EDM beats. Now the drum patterns utilize space as a weapon, casting a bare framework to build percussive tangents out of, many of which are rather gaudy and unsatisfying given the pallet of sounds. Clinging to them, a swirl of unraveling synths, buzzing and phasing across the soundscape. Loose forms of melodies drop in and out of focus and occasionally some heights are scaled by lead synths playing out a form of nightly adventurous solo. There is even an actual distortion guitar solo stashed in here too.

Despite this pivotal move to a steady, brooding beast, the same problems plague the music. Its overselling of the theme leaves a couple tracks out of color. It does however conjure streaks of gusto as its components align with a sinister presence, the likes found from the comfort of a video game. The final track gets fired up with aid from heretic samples. After its opening phase the song lulls with suspense as its synths steadily build to the unleashing of some chunky Industrial Metal style guitar emulating tones. Its got Metal fever and energy to match, a big bow out for a rather mediocre project. A lot of the record is meandering and without conclusion of direction. The occasional Doom snippets muster some excitement but unless in the right mood, often as background music, it doesn't hold up so well. It would however make a fantastic game soundtrack. Music like this often does and If I had gotten into it charging down corridors of a demon infested mars base, blasting weapons at beastly creatures, I'm sure id love it. Its a fair grade better than the debut, the shift in direction a fitting one but there is still a long way for this project to go in my opinion.