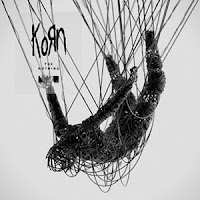 Its going to be a common theme that I mention how time is flying by. Already three years ago now, the Nu Metal pioneers Korn released a positive "come back" record, The Serenity Of Suffering. Although the soaring heights of the late 90s and their MTV dominance are long gone, it was quite the surprise to hear a band that had struggled over the years to regain the spark of their youth and even more so in this new chapter The Nothing. Where the last album delivered powerful riffs and good song writing again, Jonathan Davis seems to have excelled past his band mates with another riveting "tortured soul" performance. At this stage in his life the recurring angsty themes and narrow use of language that again has the word "why" posed all too often seem more genuine than routine. With his band mates on fire they unite again and again with really good hooks for their "Pop Metal" format that drives songs frequently from chunks of groove and quirky melodies into swells of thick, smothering emotion.

The record grew on me slowly. It was familiarity with the actual details of the songs that blossomed the giving magic of music. With a style and identity so ingrained it can be a little to easy to gloss over. Fortunately around the fifth or sixth listen the charm started to sparkle. Korn have a fantastic dynamic of crunching riffs and odd emotive melodies that lean into the moody and brooding. With their front man JD on form, the narrative is illuminated. I would never question his authenticity but with the recent passing of his wife one can see how his eternal battle with inner agony has laid down fresh wounds that brings out the best of his unique talent. Its a sad reality but pain has always been what invigorated his iconic voice.

The record does get stretched through a few routine songs in the midsection, however the tracks either side always offer up a spice to define it among the general theme, something they haven't achieved since Untouchables. Ray Luzier fits like a glove on this record, his drumming proficiency finds a sweet spot to give percussive detail to the momentum, driving groove with an animated structure. The Monkey and Head dynamic isn't as striking, more like a fine wine, the subtleties tend stick around longer. There are plenty of thumping riffs but the classic style heard on You'll Never Find Me really sounds like stiff a reworking of Ass Itch. The creepy melody aspect tends to linger in the background and through the synths which get a moment on Can You Hear Me for the band to move their atmospheric side into new territory.

Opening with bagpipes and JD's agonizing cries and screams the record sets the tone for whats to come but it wraps up with one of the saddest songs, Surrender To Failure. It ends with a chilling vulnerability in his voice as he confesses his failure with fragility. Its everything Korn has ever been about and although gravely fueled by tragedy it has birthed a band able to re-arrange themselves with fabric of their greatness and a bold statement moving into a new chapter. This won't make waves and revive a former glory but anyone who's ever been a fan will adore this record giving it a chance.